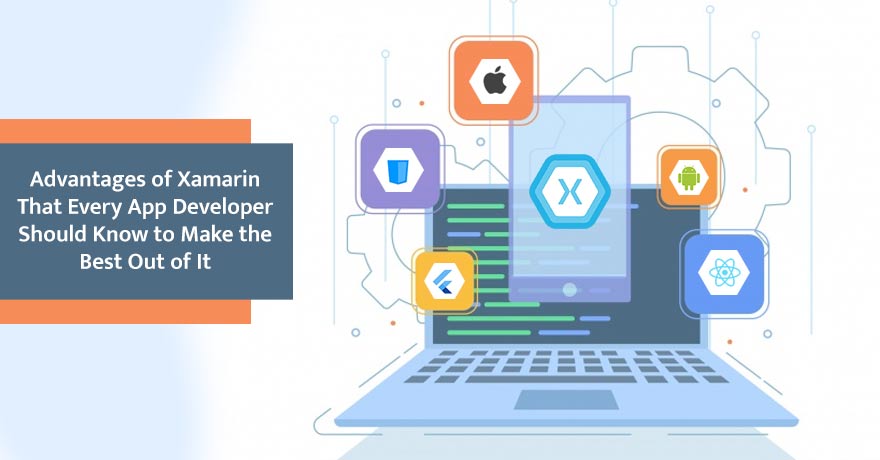 What do you understand by Xamarin? It is a free, open-source, and cross-platform that is used for building iOS and Android applications with C# and .Net. With Xamarin tools, the developers could build Native, iOS, Android, and Windows apps across multiple platforms. An Android application could help you grow business in several ways.
Mobile applications are gaining popularity, and it seems that developers have gone beyond the logic of coding. Whether you are using a UI across a platform or building a native user interface, Xamarin apps meet the user expectations.
Also, if you are developing an Android, Windows, or iOS mobile application, then know these common mobile application mistakes that should be avoided. Let us now delve deeper and understand the key benefits of using it for mobile applications.

When it comes to mobile applications, you can’t ignore Xamarin. It is a tool used for cross-platform mobile app development and allows the developers to share nearly 90% of code across several platforms. Xamarin is based on the Microsoft technology stack and has a community of over 1.2 million developers. It can help build applications using C#. The new concept that developers now work on is Xamarin vs. Native.
Xamarin is a robust cross-platform app development that helps to build a single app for different devices. It is a streamlined mobile application platform that allows you to deliver solutions for different platforms at once, instead of doing it separately. Xamarin is considered to be the robust language for large applications. It is user-friendly and allows development companies to respond to every requirement of the customers without putting much effort.
However, it has benefits and limitations as well. Before you plan to build a mobile app with Xamarin, know the key features of it.

Highlights of Xamarin and Reasons for its Popularity

Here are amazing features of Xamarin and the reasons why it has become a foremost choice of developers.

Xamarin uses C# programming language for mobile applications. It is a modern version of C++ and offers significant improvements against Javascript and Objective C.
The language is object-oriented and has straight forward syntax making it possible for the developers to use headers and pointers. It is functional for multiple platforms and offers high performance.

2. It Consists of Xamarin Android, iOS, Test Cloud, and HockeyApp

Xamarin has different compilation strategies. Xamarin iOS is used for iOS development. It allows the developers to build iOS applications with the same UI controls that are offered for other platform apps.
Xamarin.Android is used for Android app development. It is first compiled into intermediate language and then later converted into the unique-assembly code in run-time. Also, Android has become a great choice for building on-demand applications.
Xamarin frameworks are another important feature of mobile app development. It is separate from Xamarin.Android and Xamarin.iOS. It offers different ways to design the UI of mobile applications. Initially, you code the Native UI for each platform with a single codebase. Secondly, you code UI for different platforms with 100% sharing. Developers could create a prototype or a mobile app with a design that has a similar code for Android and iOS.
While Xamarin.Forms create apps for Android and iOS, Xamarin.Mac is a product of a framework that allows you to design apps for macOS.
Xamarin Test Cloud is used for testing Xamarin code on several platforms. It is a cloud-based application and provides tools that support automated UI acceptance. HockeyApp is used to collect feedback for the app. You could choose the combination of .NET library functionally and Mac OS X APIs for mobile applications.
What’s amazing is with Xamarin, 0-80% of code could be reused and constructed in C#. The amount of code that could be reused depends on the model of Xamarin development chosen between forms, iOS, and android.

It has access to platform SDKs, Cocoa Touch, AndroidSDKs, for iOS. The integration provides support for the application features, from the time it is inserted in the device’s OS.

4. It Works on Smart Devices Including Wearable Tech

It not only supports the development of mobile applications but also works on smart devices like wearable tech. Developers could use Visual Studio to create applications for Windows, Mac, and smartwatches.

Everyone prefers using native applications for their business. It is secure and offers the best user experience. Thus, the Native mobile app is the future of mobile applications. Xamarin is a unique approach and provides the advantages of native UI. It gives access to specific features and reduces the development cycle.

Xamarin is a cross-platform development king. It boasts a community of a million developers who are enhancing the software. Know some benefits of using Xamarin below.

The most important part of using Xamarin is, it contains 90% reusable code. The code could be used for the development of apps on several platforms. The coding of the app is based on C# and .NET libraries.
As the developers could reuse the code, it becomes easier for them to develop apps that accelerate the pace of the development cycle. It shares a similar code on different platforms and reduces the development time.

It is a cross-platform app development tool and enables C# coding. This results in the native look and feel of the mobile app.
Xamarin converts UI components into specific elements and delivers an app-like experience.

Another feature why Xamarin is the preferred choice of everyone is its shared application code. The developers could share the codes across several platforms, making it easier for developers to build an application. The important UI logistics like back-end API interactions and web service calls are coded with C#.

With Xamarin, you don’t have to worry about hardware compatibility issues. It offers a range of APIs and plug-ins and supports cross-platform app development, which allows the developers to enjoy native-level interaction with device hardware.
It minimizes compatibility issues. Furthermore, it delivers the freedom to connect native libraries to create great apps with customization.

In Xamarin, the developers do not have to build code from scratch and to process the debugging. They do not have to update the logic and efforts to maintain the code. This decreases the cost as well.
Furthermore, Xamarin has design environments for Visual studio and offers UX design tools. It gives a flawless UI and offers the best experience.

For native app development, the developers should know languages such as Swift, Java, and more. The codes should be optimized for a platform that cannot run on others. Xamarin is a software that uses C# to make interaction with databases and logic for input validation.

Limitations of Using Xamarin For Any Business

While Xamarin technology offers several benefits, it has limitations too. Before you hire any app developer to create your app, understand the limitations of it to grow it successfully.

Sometimes Xamarin is not the first choice of businesses. It takes more time to adjust the application file size. Also, it supports most of the .NET libraries; it doesn’t support third-party libraries for Android and iOS without specific wrappers. Also, Xamarin apps are larger than native ones.

When you have to build a mobile app, then you must have a basic understanding of the native language. The developer should know the technologies like Java, Objective - C, and other basic languages.

3. Not Comfortable with Heavy Graphics

With Xamarin, you could share the codes across the platform. But, only logic and UI could be shared.
On average, with Xamarin apps, nearly 70-80% of the code, including business logic, is shared. The rest is platform-specific, and depending too much on the app could be a complex method. This cancels the code-sharing benefits.

The Xamarin community is smaller than that of Android and iOS. However, the platform is growing and is supported by Microsoft. The number of Xamarin engineers can’t be compared to iOS communities and is providing extensive support to its developers.
Also, the developers lack standards and development resources. It takes time for Xamarin apps to get updated. The developers couldn’t work on new features until the support is enabled.

An attractively crafted mobile application provides value to a business and customer engagement. Also, choosing the best mobile app platform from different platforms existing is difficult. Xamarin is a cross-platform solution and works across multiple systems and devices. It is a popular framework for Hybrid mobile applications.
Before you decide on the platform, make sure that you go through different requirements and the project goals. Engaging multiple platforms is a great way to provide user satisfaction across different devices. Also, ensure that you choose the best web development company to meet your goal.
If you are new to the field, then here are basic things that every web developer should know. We have the best team of experts that could develop innovative mobile applications for several platforms. We have delivered multiple projects related to IT staffing, digital marketing, and mobile applications. If you are looking for truly functional mobile apps, then associate with us and meet your goals.

Why is Vue.js the Best Framework to Build Engaging UI & Single-Page Apps?