Android vs. iOS 8 Key Parameters to Consider When Having Limited Budget 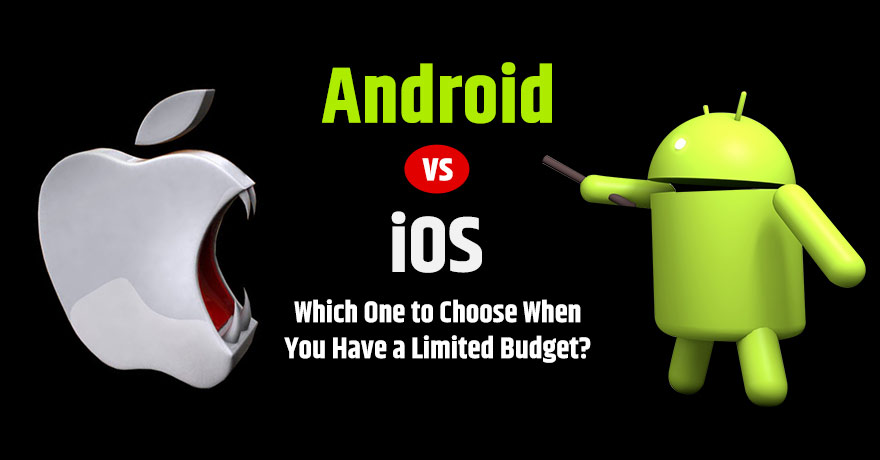 We all know this is the era of online business. And, mobility has become the mainstay of online businesses over the years now. Yes, and it could be said that without a robust mobile presence, it is practically impossible to expect growth. However, this is not a major issue anymore because almost all businesses are set to begin their mobility journey; the biggest concern is picking the right platform to work on.
Possibly, this is nowadays the first question that your app development company may ask when you approach them for developing one for you. To answer these, the options they will present will include Android and iOS for sure because both are the key platforms, especially to connect and reach with the markets.
And, choosing between platforms like Android and iOS has always been frustrating for organizations. Because it is an undeniable fact that businesses consider so many parameters while choosing between the two, which includes market focus, the demographic structure, and development budget.
Well, your app marketing budget is something that can influence the selection beyond all these parameters. Moreover, rather than criticality, nothing much is said about it as the business mindset is majorly tilted towards the development costs comparison.
Let’s take a look at some of the facts and questions that can assist you in determining the right platform based on your budget. But before knowing about Android vs. iOS, let’s have a brief knowledge of both platforms to understand well.

A platform for mobile devices that uses a modified Linux kernel is what we call the Android platform. In November of 2007, the Open Handset Alliance, an alliance of prominent companies that includes Google, HTC, Motorola, Texas Instruments, and others, introduced this Android platform. If we talk about its programming language, most applications that run on the Android platform are written in Java; there is no Java Virtual Machine. So, first, the Java classes are compiled into what we call Dalvik Executables and run on the Dalvik Virtual Machine.
Apart from that, it is an open development platform. However, here open development does not mean that anyone can contribute while a version is under development. Because this all happens behind-closed-doors at Google. Instead, the openness of Android means the platform’s source code is released to the public once it is finalized. Yes, it indicates that the moment it is released, anyone interested can take the code and alter it as they see fit.
A developer requires the Android SDK to create an application for the platform, which includes APIs and tools. And, Android developers typically integrate the SDK into graphical user IDEs (Integrated Development Environments) to shorten development time. Novices can also make use of the application for creating Android apps, i.e., App Inventor, which can also be accessed online.

A mobile operating system for Apple-manufactured devices is what we call iOS. It runs on the iPhone, iPod Touch, iPad, and Apple TV. In other words, software that enables iPhone users to communicate with their phones making gestures such as swiping, pinching, and tapping is this platform.
In the iOS devices, all such finger gestures are typically performed on multi-touch capacitive touch screen displays that offer fast response and accept inputs from multiple fingers. With a 60 percent market share, iOS dominates the North American market; hence, we can say it is not the No. 1 mobile OS globally.
iOS is a Unix-like OS and is derived from Mac OS X. There are usually four abstraction layers within iOS:

For security and interaction with external hardware, it offers low-level features as well as frameworks.

It offers essential technologies for graphics, video, and audio.

This is where frameworks are located that we often use while creating an application.
There are some default apps in iOS, including an email client, a portable media player (iPod), a Safari Web browser, and the phone app.
To create applications for Apple mobile devices, Developers can use the iOS software development kit (SDK). This SDK Kit comprises interfaces and tools for developing, running, installing, and testing apps. Moreover, by using the iOS system frameworks and the Objective-C programming language, Native apps can be written.
Plus, Xcode Tools are included in the iOS SDK, which carries a graphical tool for creating the user interface, an integrated development environment (IDE) for managing application projects, and a debugging tool for analyzing runtime performance. It also incorporates an iOS simulator that enables developers to test apps on a Mac and an iOS developer library, which offers all the required documentation as well as reference material.

Android vs. iOS: Parameters to Think Upon If You Have a Limited Budget

1. The Cost of Putting Your App Out There

The moment you are done with development, your app marketing endeavors shall begin. Now all you need to do is to put your app out there for the users. And, for that, you have to register on the App Store for iOS or the Play Store for Android.
One of the major differences in the way both the store works is the way they charge you. Like it is a one-time registration fee for the Android platform. On the other hand, you will have to pay $99 for a one-year registration for iOS, which means you will be charged again for the next year.
So, how to choose between these two. Well, it makes sense to pay $99 for a year and not renew the registration only if you have an app that may be short-lived in terms of popularity of usage.
For example, most gaming apps, like Pokémon Go or Angry Birds, experience a quick shot to popularity, and soon they are forgotten. Hence the developers should start focusing on fresher and other ideas/concepts.
And, besides that, utility apps intend to have a longer lifespan. Because users will keep downloading those apps as per their needs hence they may not enjoy a quick shot to fame.
Even though people claim that for the App Store, the higher registration price is supported by the high average app price, but the stats show little variation.
Because now, between the iOS and Android app revenues, the huge difference is on the verge of diminishing. And, the reason behind is Google boasted a whopping 27 percent growth in in-app revenues last year.

It is a fact that the development time is entirely dependent on app development costs. And the time taken by Android app development will be more compared to iOS since more devices need to be tested quite often for Android.
So, if you are trying to create a highly complex app, then go with the iOS platform as it does not need much testing.

3. Think About Your Target Audience

In the US, Android is yet to beat iOS, but still, it is the leader in the global mobile market. So, if you want to target the global customer base, it makes more sense to go for Android. But again, US-based users are more active on the iOS platform.
It is revealed by a study of the difference in the demographic that the iOS customer base is smaller. However, it comprises of higher-income, educated users who spend more time and money on the app.
But on the other side, a huge majority of Android users are located in low-income countries. It can also be said that the iOS platform is also much preferred for business purposes. Yes, most of the entrepreneurs and C level executives prefer iOS over Android.
Hence, consider whether you will be able to target your main customer-base or not while deciding on your app marketing budget. We must say that Android is a great choice, especially if you aim to go for a diverse demographic from across the world.
Still, make sure that you won’t get much out of an Android app if you want to target high-income individuals in the US. And, even a budget-friendly marketing campaign wouldn’t bring the expected revenues. So, all you need to do is choose your target audience before choosing the platform for more and more benefits.

Cost per install (CPI) is one major marketing budget parameter among all that influences the choice of the development platform. It is quite similar to PPC, in which when the user installs the app on their device from the app store, they need to pay some specific amount.
And, once again, as compared to that for the Play Store, the CPI cost for App Store figures higher. Hence, for deciding the option that fits your budget well enough, you need to calculate and compare the two.

The behavior of how customers react to your marketing campaign varies from platform to platform. As we have already mentioned above, Apple users have a higher rate of engagement and tend to be more active. However, Android users are twice as likely to click on it as compared to the iOS users in terms of reaction to push notifications.
Well, there could be many reasons for these differences. One of them could be the way both the OS display and handle push notifications is different. Like iOS, notifications disappear after the first unlock, and on the other hand, Android Push notifications stay on the lock screen or notification bar until clicked. Perhaps Android users also react much quicker than iOS users due to this very reason.
Hence Android can help in growing your business and also a good way to ensure there is a quicker and better response if you want to spend on push notifications.

In simple words, revenue is something that businesses work for. And, whatever platform you pick for you strongly influences the revenue you generate. Surprisingly iOS generates double what users generate on Android when combined, although iOS has lesser users on its platform.
So you can consider going with iOS if revenue generation is your priority rather than making an app for both iOS and Android. Also, you can say it is one of the reasons to choose professional iOS app development services over Android.

The center of any app marketing campaign is now App Store Optimization. And, because Android is a Google product, it naturally seems like the best option for marketers. So, for anyone who has solid Google SEO knowledge, optimizing for the app store isn’t too difficult. Yet, SEO and ASO are very different.
It could be someone’s assumption that Google will naturally prefer Android apps and rank them better. However, it is not true because there is a smart algorithm in place that will show apps that are more relevant to the device’s OS.
This is very important to know that the Android apps Play Store isn’t the only store. There are many cross-platform app stores, plus almost every device manufacturer has its store.
Besides all, maybe the Apple App Store is Google’s rival product, but it doesn’t impact ASO aspects and the ranking of app marketing. Though, in comparison to playing store, the inbuilt ASO capabilities of the App Store are currently much ahead.

After learning for all these parameters in detail, you will now probably have a good understanding of the impact of mobile development platform choice on the marketing budget and vice versa.
Thinking upon these eight points will greatly help you in deciding the one that works for your business from the perspective of marketing costs. Further, in making the right decision based on the holistic overview of your requirements, challenges, expectations, and budget, you can surely seek expert advice to help you.
Hence we, at Covetus, offer expertise in iOS and Android app development services and can also help you with choosing the right platform for you. So, share your requirements with us and we will not only give you an apt solution to match but will also help you with efficient services.