How is Native Mobile App Development the Future of Mobile Applications? 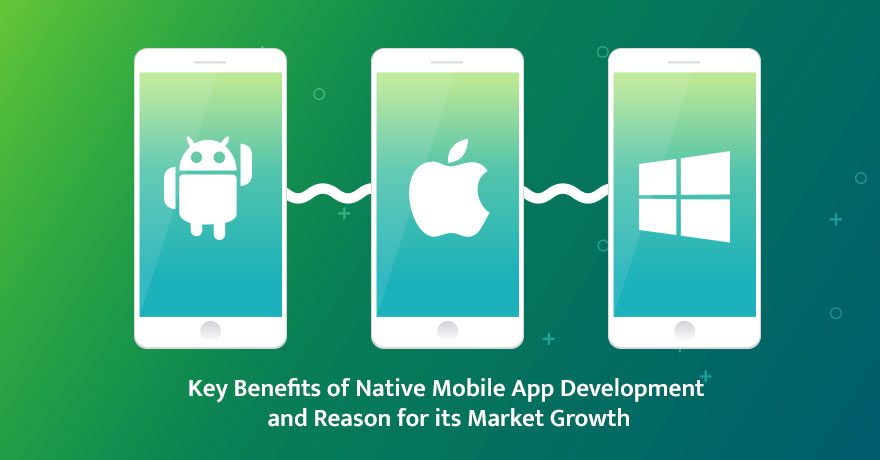 In today’s scenario, building a mobile application has become a necessary tool for any business. Usually, there are three types of mobile app development used for any project: Native, Hybrid, and Web. Depending on business projects and requirements, these mobile apps are used.
Over the years, the use of smartphones has increased, which has also improved the usage of mobile applications. Several companies find building a mobile app a priority, but it is difficult to choose between Native, Hybrid, and Web applications.
In this age of smartphones, businesses are prioritizing native mobile app development over other apps, as everyone prefers using mobile apps for everything. Furthermore, it combines easily with the whole ecosystem.

What Do You Understand by Native Mobile App Development?

The Native mobile app is the most common app used for business. It is a software platform that is used on a particular platform and device. These apps do not run on the browser; instead, you have to download them from specific app stores such as Play Store or Google Play. After installation, you could use these apps by tapping on their regular icon on smartphones.
It could be a powerful way for any business to attract the audience in the growing mobile-ecosystem. These applications are built using a particular platform in mind. Native apps could take advantage of the existing operating system. However, it could take time to keep it updated. These apps could access different services like accelerometer and push notifications on the device.
Before you jump on to know the key benefits of using Native App Development, understand how it differs from Hybrid and Web Applications.

When it comes to choosing applications, you can’t deny that native apps are preferred by the end-users. Hybrid applications have consistent user experience across different platforms. It also achieves the same hardware performance as a native app.
However, it depends on several libraries and frameworks. If you aim to cover the audience using Android and iOS, then you can’t choose progressive web apps. IOS is limited to the progressive app.
Coming to web apps, they are websites and have more interaction and feel like an app on a mobile device. It could be developed in less time and an inexpensive option if budget is a problem.
The drawback of using web applications is that it doesn’t have an app icon on the home screen and doesn’t send notifications about the product. It is slower and doesn’t have access to the device’s features and notifications.
Hybrid apps couldn’t work offline and depend on the browser speed. The Native app gives the best user experience and offers the best security. Hybrid apps are built using technologies like HTML and Javascript, and Native apps are built with a specific technology.
Some also believe that React Native is better than a native app for mobile applications. It is faster and does not compromise on the application’s features. But it has limitations to third party libraries. Native, on the other hand, is a robust language and supports a lot of third-party functions.
Let us delve deeper and understand what Native Mobile App Development is and why it is gaining popularity.

While Hybrid applications depend on systems security, native apps are safe by different layers of OS. Therefore, native apps are hard to misuse.
Furthermore, Native applications do not rely on a third party. They utilize official APIs that have been tested through different versions. Developing Native Application is a great way to guarantee users reliable data protection.

Maintaining Native Mobile App development is a bit complex. The users must have the latest version of the app to launch any app. However, the notification about the app updating is notified easily to the users. It is easy to discover in app stores.

Unlike other applications, Native apps are quicker and offer the best experience to the end-users. As these apps are written on a specific platform, they operate quicker and run seamlessly. Also, Native apps could access unique elements and could be optimized for several devices. These apps are extremely efficient and are compiled using different platforms, programming language, and APIs.
Furthermore, the device stores the app, which allows the software to leverage the processing speed. The loading time on the native application is quick, as the visual elements and contents are already stored on the device.
For every platform, Native apps have a specific UI standard and an excellent outcome to it. Hybrid apps, on the other hand, depend on native browsers and are not as fast as native apps.

Native apps inherit the device’s user interface, making them feel like an important part of the device. These apps are created specifically for an operating system and stick to the guidelines. As a result, the apps look natural and allow the user to learn the app easily.
The user could add or delete the element quickly in the Native app. It takes advantage of the OS features and could access the hardware of the device, such as a camera and microphone. They are faster in execution and deliver the best performance.

With the Native app, the risk of bugs is less during development. It is more difficult to maintain two applications in a single codebase than to maintain two applications in two codebases. Native apps do not rely on cross-platforms, such as Cordova.
The web developers through the native apps could access the software development kits to build their applications with the latest features. Hybrid apps have a slow-developing process, and this sometimes frustrates the user.

Native apps are generally costlier than hybrid apps, but it is a one-time investment that could benefit the business in a long time run. Budget is the most crucial thing for any business and developer.
Undoubtedly, native apps could cost you more, but it also offers the best user experience. These apps need time and effort to be built and are recommended to be paid. Hybrid apps are launched free.

If a developer is building a native app, he/she has knowledge about the UI for the native application. At the time of developing an app, the developers find it easier to apply the best standards. The users look for the application that looks and feel good when they use them. An attractive app is the result of a better User Experience and User Interface.
Chances are if users don't find it easier navigating your app, then they would delete it. The native app offers an excellent UI and UX. All these reasons make a native app the preferred choice of everyone. If you are developing an application for the iPhone, then here are a few tips that you could use to optimize your UI design for the app.

Even if there are two native applications to be made and that are different, then you don’t have to worry about the compatibility between different versions. You could easily use the features provided by the platform.
But if you want to combine the native and cross-platform solutions, then you might need to maximize smaller app modules with cross-platform code.

Another benefit of using Native apps is these apps could be run without internet connectivity. In case you are using a native app, and suddenly your internet connection stops working, even then you could use the native app. The reason is the content in the navigators, games, and planners get downloaded when you are online.

While Native App Development offers several benefits, it has certain drawbacks.
For instance, it is not a great option for a business with a low budget. Let us know more limitations below.

The Native app offers several benefits for a business with a good budget. But it is not suitable for a business with a low budget. Also, it requires a technical process for each platform. This increases the time spent on a native app.
Furthermore, building a native app requires more funding and staff. If you need an application for different platforms, then you have to think about simultaneous development.

While developing a Native app, the developers have to add unique features at a different stage of development. This needs more time, and thus, the development time becomes longer at each phase.

Choosing from different types of applications for your business is difficult. But whatever you choose from Native, Hybrid, and Web, make sure that the app should deliver higher performance and meet the customer expectations.
Native Mobile apps are costlier than other apps but are worth developing. If you are planning to build a new app, then make sure that you hire the best web developer in the industry.
We at Covetus have extremely talented web developers and have the experience to build customized applications for any device. Be it Android, Windows, or iOS: we focus on delivering excellent user experience.