Things Every Technophile Should Know About Flutter 3.0 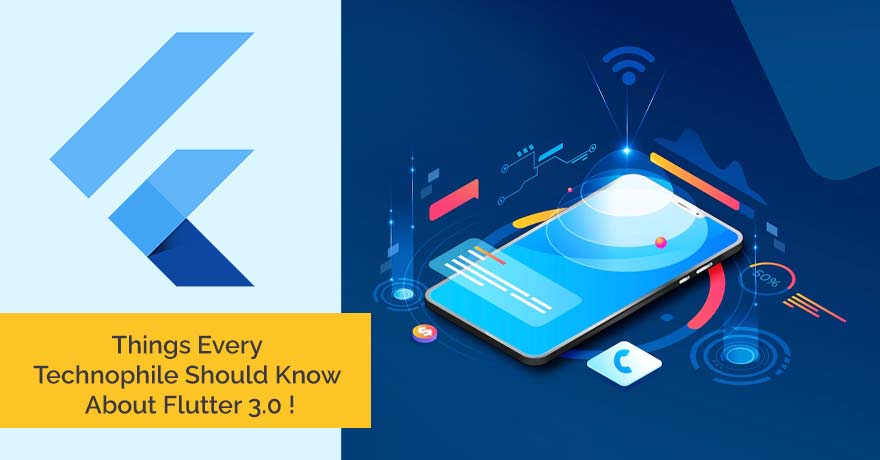 The popularity of mobile applications has been on the rise this year. Fortunately, developers have access to several programming tools which help them to create these applications. Flutter is one such tool that has established its distinguished position among all the developer tools due to its advanced features.

Developed by Google, Flutter is an open-source UI software development framework released in May 2017. To be precise, the tool lets you build a native mobile application with the help of one codebase. Therefore, you can build two different apps using one codebase and one programming language.

What do you understand by Flutter 3.0?

On May 11, 2022, Flutter 3.0 was released as a part of the Google I/O keynote in Google I/O Edition. By default, Universal binaries on Windows, macOS, Apple Silicon chips, Intel premium, and Linux platforms are supported by the new Flutter 3.0, which in turn, improves Firebase integration to increase productivity.

Flutter 3.0 also accounts for multi-platform UI development, including mobile phones (Android/iOS), the web, and desktops. It can support macOS out of the box but requires plugins that set WidgetBinding.platformMenuDelegate in their initialization for other platforms. The Flutter 3.0 release makes it suitable for creation procedures across all desktop stages.

The Launch of Flutter 3.0 – A Journey that found its Destination

It will not be an exaggeration to state that so far, Flutter 3.0 has done miracles in the world of technology. Since the time, Flutter launched to bring revolution to the domain of app development, the journey of Flutter has walked several miles along.

Be it incorporating the repetitive web development model with accelerated graphics rendering or pixel-level control, which was restricted to only games. In the past four years since the advent of Flutter 1.0 beta, Google has been giving continuous endeavor for developing these establishments, coming up with the latest fidgets, frameworks, and deeper integration with the fundamental platforms. The cherry on the cake is a rich package library and multiple tooling and performance improvement options.

Various industries have started investing in pathbreaking Goggle innovations and developing apps with it that could lead their businesses to six figures. The declaration made by experienced data researchers at data.ai that well-known platforms like SHEIN, WeChat, Tabcorp, and many others use Flutter has added another feather to the software’s cap. 91% of developers have considered Flutter a much smoother platform that is capable of building and publishing apps at a faster speed. 85% of developers even stated that they could publish their cited and that they could publish their applications on more platforms.

Let’s dig deeper into Flutter 3.0 and know about its latest developments:

• Flutter’s Firebase Support: Not only the UI framework, but the app publishers also require advanced tools to assist them in developing, releasing, and controlling your applications with other important services such as device tasting, data storage, cloud functionality, and data authentication. Flutter’s functionality has witnessed a lot of improvement due to services like AWS Amplify, AppWrite, and Sentry.

A majority of the developers use Firebase in their applications. Flutter’s suite of Firebase plugins is now transforming into a fully supported fundamental part of the Firebase offering. Therefore, the plugins now come under Firebase’s website and repo.

Hence, Google is trying to develop new flutter widgets that make the process of using firebase in your application smoother. Using the Firebase Crashlytics plugin, you can repair the bugs by tracking the errors. Critical alerting metrics such as “crash-free users” are developed to keep you updated about your app’s stability.

It allows developers to build games from scratch. It also leads to creating integration-ready features like play services and in-app purchases. With Firebase, games can be created on the Flutter platform using a single codebase and accelerated graphics.

• Compatible with macOS and Linux platforms: Flutter 3.0 is also compatible with Windows Platforms, as well as ready for release across different other platforms.

• Refresh Rate Support for iOS variable: The applications created using Flutter can offer a 120-hertz refresh speed per second for iPad Pro and iPhone13 devices. The speed has doubled since the last update, giving the user a smoother experience and speedier animations.

• Improvement of Memory: The performance metrics for Flutter are displayed by Lighthouse. Also, Flutter 3+ providers’ tools and APIs can offer you an insight into the performance metrics. It can repair junky animations, using memory logically and accommodating apps of assessable size.

With the launch of Flutter 3, the platform can now reach iOS, Android, Web, Linux, macOS, and Windows—all the six platforms together. In future, Google will also keep on working on its two major aspects like renovation in developer productivity and expanding Flutter as a software.