Why is Vue.js the Best Framework to Build Engaging UI & Single-Page Apps? 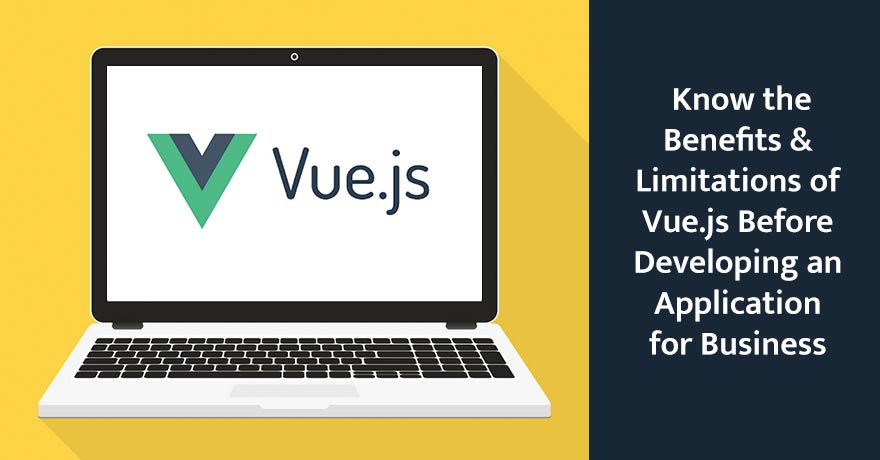 With several technologies launching every day, it becomes difficult to choose the best for your business. While you have a Node.js to make web development easier and attractive, you also have native mobile app development to deliver the best user experience through the app. Each technology id offers unique features to developers to make the development more engaging with fewer efforts.
Now, here comes new technology, i.e., Vue.js, an open-source Model-view-ViewModel Javascript framework. Though it is not new, Vue.js is upgrading its features and engaging developers from beginners to experts.
The first version of Vue.js 0.6 was launched on 8th December 2013, then it upgraded to 0.7 and 0.8 in a few months. The latest version of Vue.js, i.e., was released on 4th Feb 2019, with the name Macross. Let us understand Vue.js in-depth.

Vue.js features an incredible adaptable architecture that focuses on component composition. Nuxt.js is a popular solution that offers build tooling, routing, and state management through supporting libraries and packages. It lets you extend HTML attributes and offer functionality to HTML applications.
Unlike other frameworks, Vue.Js is capable of powering complex single-page applications when used with modern tooling and other libraries. Its basic use is for creating the view layer for a web application.
It is becoming one of the best javascript frameworks and is outrunning Angular.JS and React in several cases. Indeed, you can’t compare any of the technologies existing because each one of them is best for different businesses. Not just for web interfaces, Vue.js could be used for desktop and mobile app development.

Pros of Vue.js for Any Business

In many cases, Vue.Js could replace Ember and React. Here are some benefits of using Vue.Js for any business.

The success of any Javascript framework depends on its size. The smaller the size will be, the more any framework will be used. The size of Vue.js is 18-21KB. It is better than bulky frameworks, including Ember.Js and Angular.JS.
The Vue ecosystem is fast, which means the developers get the best parameters available. It also positively impacts UX and SEO.

One of the reasons why Vue.Js is gaining popularity is its simplicity. It is easy to understand and helps the developer in building applications easier. What’s amazing is large and small templates could be designed through this framework.
While Javascript is found to be the most flexible programming language, Vue.Js is more enhanced. With Vue.Js, the developers don’t have limitations to create the components in a defined way, but they could design the structure as they want.
Also, Vue.JS could build complex applications using JSX, bundling, and ES6. It provides you access to several working environments. Vue.js offers several ways to express its flexibility by expressing different codes.

Vue.Js offers detailed documentation, making it easier for the developers to execute and to write their first application. Even if you do not have a detailed knowledge of building applications, using Vue.Js is a good option.
Basic knowledge of HTML or Javascript is enough for developing a web page. Furthermore, the documentation process in Vue.Js is comprehensive enough. This means that anyone could handle complicated operations using the resources.

4. Better Than AngularJS and ReactJS

Vue.Js use the component-based approach. It features a single data flow hierarchy, high performance, and virtual rendering ability.  Evan You (the creator of Vue.Js) merged the best features of ReactJS and AngularJS and released the new Vue.js.
He created the Vue.js and aimed to remove the drawbacks of Angular and ReactJS. It delivers the best experiences on the web and has become a powerful tool for developers.

Another amazing thing about Vue.js is it allows the code reusability. The view and components are essential parts of any app and could be added to the existing infrastructure without affecting the entire system.
Therefore, Vue.js is an excellent framework for adding a lot of components to an existing template. Vue community has released several extensions for the Vue.js framework. They check the components and other tools to take a detailed look at the events.

You must have encountered DOM when scrolling the web pages. It is a representation of HTML pages with different elements and page content. The content that is stored as a tree structure is generated when the page is loaded. But sometimes, updating the DOM becomes challenging. When DOM components are tested with the updated data, then Vue.js is found to be better than Angular and React.
Another benefit is it allows two-way data binding. With two-way data binding, it becomes easier for the developers to track the updates. Vue.js is sometimes called Reactive because it reacts whenever data is changed. Two-way communication makes Vue.js different from other frameworks that allow only one-way communication like React.js.

While Vue.js offers several benefits, it has certain limitations. For instance, it has fewer plugins and issues with iOS. Know more limitations below.

Although Vue.js is evolving very fast, it has a small community. Unfortunately, it does not have the support of its frameworks and is not popular like Angular and React.
Vue.js was created by a Chinese American, and the majority of the coding is done in Chinese. This complicates things for non-Chinese developers. However, several online tutorials are there to keep you updated with Vue.js. Vue.js has fewer resources than React and Angular.
Also, the development team of Vue.js is small; therefore, it would take time to get corporate interests. The changes to the framework depend on the feedback of the members.

2. It is Evolving Very Fast

It might happen that what is trending in Vue.js today becomes outdated tomorrow. This is the drawback of Vue, as developers find this is complicated. Also, with a change in the trend, they have to learn the framework very frequently.

3. Issues With Safari and iOS

The chances are if you are using the Vue.js app on an outdated version of iOS and  Safari, then you might get problems while using the application.

4. Sometimes Being Too Flexible Could be Problematic

While being flexible is considered to be an advantage for any framework, with Vue.js, it could be problematic. The developers who have no experience in huge projects couldn’t find possible solutions.
Over-flexibility could cause irregularity within the code. However, time would be required to find a solution.

Angular is the best solution for developing application clients. It is a mature framework and takes more time for developing applications. Vue.js, on the other hand, is simple and great for “performant” applications.
Vue.js is becoming a priority because it is easy to understand and has little baggage. Angular has different structures, making it difficult for developers to learn in comparison to Vue and React.
Vue.js has smaller interactive parts that could be integrated into any infrastructure. It has similar characteristics with Angular and helps in optimizing HTML Blocks with different components.

React is easy to design, and developers do not have to worry about the framework-specific code. With React, migrating between versions of React is easier. The mixing of templates with JSX could be confusing for developers at first.
With Vue.js, the developers could develop the reusable templates in a minimum time according to the structure. It has an awesome integration and could be used for developing single-page applications and complex web interfaces.
Also, the MVVM model in Vue.js allows developers to work separately on the same app in a different section, using the same set of data.

Vue.js is inspired by both the best frameworks: Angular and React. Like Angular, it offers two-way data binding, and like React, it is component-based and implements virtual DOM. It is good for unit testing and has components that check the smallest parts of any application.
Overall, Vue.js is an excellent framework for developing the user interface. The customization and other incredible features offered by Vue.js makes it the first choice of developers.
We are amongst the best development companies that keep a check on the latest updates rolled. Further, we have a team of skilled developers who are well-versed in developing any application. At Covetus, we make sure that we deliver the best practice in web applications.

7 Meteor.js Benefits That Make it an Excellent Framework to Build Web & Mobile Apps