Angular vs. React: Which is a Better Choice for Dynamic Web App Development? 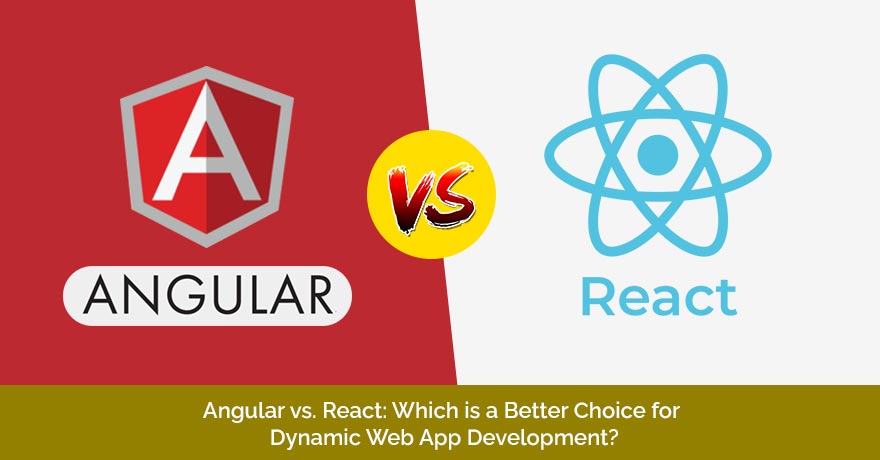 Several technologies launch every now & then. While some are better for web development, others are excellent for building dynamic applications. Should I use Angular or React to build web or apps? It is a common question that arises when you are in the world of front-end web development. Both technologies have their benefits and drawbacks; it depends on the customer or business requirements how they can be used in several ways.
For instance, Angular is an open-source Javascript framework used for mobile and web development. It is maintained by Google and was released under the name of AngularJS back in 2010. Whereas, React is a Javascript library supported by Facebook and the one which popularized a concept in web development, known as component-based architecture.
Let us delve deeper and understand how Angular and React are different from each other and what their features are.

What is Angular Web Framework?

Angular is a Type Script-based open-source web application framework led by the team at Google and by a community of corporations and individuals. It does not have a concept of scope; instead, it uses a hierarchy of components as its primary architectural characteristic.
It is a full-fledged framework and focuses on how your application should be structured. The latest 10.1.3 version of the Angular web framework from 2020 is the advanced version of the original framework.
Developers use Angular to build large-scale web applications such as booking platforms or web apps. It is one of the top JavaScript frameworks because of its coding power. TypeScript is a superset of Javascript and a statistically typed language. In 2016, Angular 4 was announced.
Angular 4.3 is a minor release, and it contains no breaking changes. It features conditionally disable animations and introduces HTTPClient, a powerful library for making HTTP requests. Angular5 was released in 2017, and it includes support for progressive web apps and improvements related to Material Design.
Angular 6, released in 2018, focused less on the underlying framework and more on the toolchain. It provided built-in features for HTTP service, animation, and materials, which has features like menus and a toolbar.
Overall, it is a fully-featured JavaScript framework that helps to develop single-page apps. If you are developing a web application for the first time, then here are Angular UI frameworks that you should consider to deliver great results.

Let us know the reasons why Angular is the foremost choice to build dynamic apps and websites.
1. Angular framework uses a two-way binding. The model reflects any changes made in the corresponding UI elements. This feature allows the framework to connect the DOM model data through the controller.
2. It uses the Jasmine testing framework. It provides multiple functionalities to write different cases. Jasmine is an open-source testing framework for Javascript. It supports asynchronous testing and makes use of spies for implementing test doubles.
3. The Angular template combines the Angular markup with HTML to modify HTML elements before they display.
4. It is a full-fledged framework and provides a unique solution for server communication, routing within an application. Also, it is cross-platform and compatible with different browsers. It can run on Firefox, Chrome, and more.
5. The framework allows you to write modular services and add them when needed. It also improves the reusability and testability of the same services. Here are other AngularJS features that every developer should know.

What is React JS?

React JS is a front-end Javascript library used for building UI components. The library is maintained by a community of individuals, developers, and Facebook. This technology popularized the concept of component-based architecture that provides different advantages.
Furthermore, it makes the code easier to understand and launch. It uses a server-side script to provide a performance-oriented solution. Also, it uses an open-source front-end library which is responsible for the application’s view layer.
React was developed by a software engineer at Facebook, Jordan Walke. He released an early prototype of React called FaxJs after being influenced by XHP, an HTML component library for PHP. In 2017, Facebook announced React Fiber, a new algorithm of React library for building user interfaces.

Reasons and Features of ReactJS That Every Developer Should Know

Here are the reasons why React JS makes it the preferred choice of developers.
1. The easy creation of dynamic applications makes it easier to create dynamic web applications. Also, it requires less coding and features more functionality in comparison to Javascript, where coding gets complex quickly.
2. It uses virtual DOM and thus, creates web applications faster. It compares components’ previous states and updates the items in the real DOM that were changed. It does not update all components as web applications do.
3. Components are the important blocks of any React application. These components have their logic and controls that can be reused throughout the application, which in turn reduces the application’s development time.
4. It is easy to use and learn and combines basic HTML script concepts with a few benefits. However, you have to spend time understanding React’s library.
5. React JS can be used for the development of web and mobile applications. React Native, derived from React, is extremely popular and is used for creating beautiful mobile applications.
6. Facebook has released a chrome extension that is used for debugging React applications. This makes debugging React web applications faster and easier.
7. JSX is an extension to Javascript. The syntax is used with React to describe what the user interface should look like. By using JSX, HTML structures can be written in the same file that contains Javascript code. This makes the code easier to debug.
8. React uses VDOM and makes the web application run faster in comparison to those with alternate front-end frameworks. It breaks a complex user interface into single components
9. React goes beyond UI design and features several extensions that offer application support. It employs Flux and Redux extensively in web application development. React applications are easy to test. Facebook also provides a smaller extension that makes React debugging faster and easier. Here are other benefits of React JS that make it the best choice for every developer.

How Angular and React are Different from Each Other

1. History of Angular and React

Angular Curve is a framework, so if anybody wants to do a project in Angular, they need to learn new things like decorators, services, pipes, and templates. In the advanced versions, it requires zones, compilation, and Rx.js.
Contrary to this, ReactJS is a library, so it has fewer concepts to learn as compared to Angular JS. It uses JSX, so there’s a need to know the syntax of JSX, props for configuration, managing internal state, and more.

Angular works on Real DOM and follows the MVC pattern. It follows a bidirectional pattern in comparison to React, whereas React JS works on virtual DOM, which is a copy of a Real DOM. It follows unidirectional data flow, and the size of React is smaller than Angular.

Angular is used for large applications like music instrument apps because of its framework nature. Contrary to this, ReactJS is a library, so it is an excellent choice for SPA or where it doesn’t require formatting.

Angular releases new versions frequently (after every six months). So, in a year, you have two major releases to make necessary changes. Angular is supported by active communities of Google, and its current version is 7.0. React’s version is 7.0 and is maintained by Facebook.

Angular uses two-way binding and helps you ensure that model state changes when any changes are made. React uses one-way data binding, which means UI elements can’t be changed without updating the existing model state.

With so many frameworks to choose from, deciding the best technology is a difficult task. When choosing between Angular and React, the decision depends on personal preference. However, while making a decision, it is important to remember that Angular features more build-in functionalities, whereas React has an easier learning curve.
We, at Covetus, have specialization in developing functional websites to meet the customized requirements. Using the latest technologies and trends, our team could develop impressive products to attract users.

Point of Care Technologies (PoC): Future and Benefits in Healthcare IT