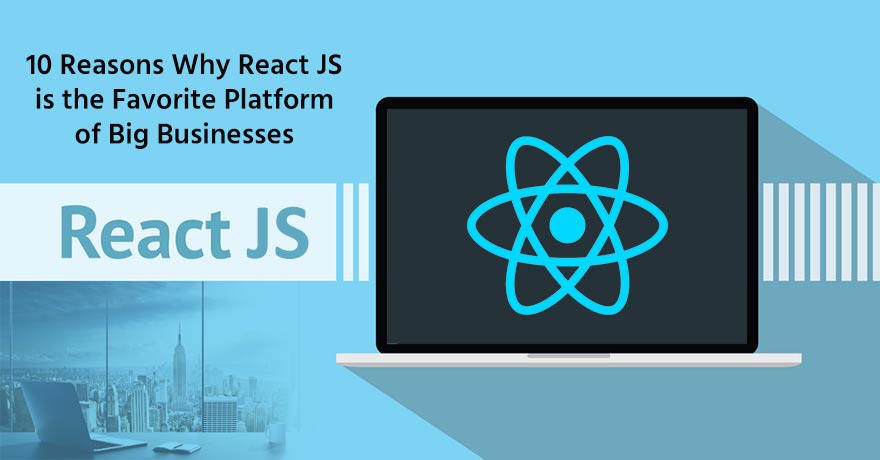 It is the time when the digital revolution has transformed the business scenario. Yes,  whether it is the enterprises or IT firms, all are looking to adopt specialized solutions for the mobile and the web.
And, when it comes to choosing the right technology framework, the decision is a tough one for businesses. However, many big brands are using React Native nowadays. Yes, it is one of the leading mobile development frameworks that is trusted by renowned brands such as Facebook, Skype, Instagram, Airbnb, and many more.
Well, we are not saying that is associated with some brand leaders; hence it is one of the best frameworks here. Because apart from that, businesses are choosing ReactJS development as a part of their mobility strategy for ample reasons.
Before understanding those reasons, let’s have a brief knowledge about the framework and its work too.

What is the ReactJS Framework?

In simple words, a tool to build UIs - a JavaScript library for building user interfaces is what we call the ReactJS framework. Well, since it gives developers much more freedom than Angular or Vue, some software engineers prefer not to call it a "framework."
As we know that Angular is supported by Google, similarly, ReactJS is maintained by Facebook and a huge community of developers. However, both frameworks are open source and free to use under the MIT license. The fact that makes ReactJS more interesting is it is only six years old, and that makes it a relatively new and fresh technology to work on. And more importantly, it gets matured very quickly.
Moreover, you can build dynamic applications with JavaScript, where the browser performs a substantial part of functions, so they can work without contacting the server. Besides, it also enables the data and interface to be updated independently in just a part of an app even without reloading it.

What Does ReactJS Do?

One can use React as a tool to build both UI components and whole UIs. It can help with everything that concerns putting together visual elements, binding data to those elements, and specifying the logic governing it.
Plus, with ReactJS., it is possible to create user interfaces in JavaScript for different platforms. Whereas, you can use React Native for mobile app development (sharing the majority of code between Android and iOS), ReactDOM for web applications, and cross-platform hybrid desktop applications with Electron. Moreover, Microsoft has also recently released React Native for Windows.
Besides all, using the framework benefits as ReactJS can also be executed on the backend (server-rendered) and used for desktop apps even if it is a frontend technology only. For using modern JavaScript frameworks, there are two possible approaches – client-side rendering, where the browser downloads the code and renders the UI, or server-side rendering, where the UI is rendered on the backend.
The only difference between older technologies and JavaScript solutions (such as ReactJS)  is that JS takes over much more of the logic and document manipulation, just as if it was not server-rendered at all.
Another main feature of ReactJS, which makes it unique in comparison to other popular JavaScript frameworks, is flexibility. Yes, one can use a library and use it to display a simple page or a view, and on the other hand, you can also combine other tools with  ReactJS and use it as a framework that will lay the foundation for a complex application.
Must say that as it has a vibrant ecosystem that consists of tools, libraries, and approaches, it's more than just a library. All such can be used as a custom framework as well as a toolset.

Difference Between ReactJS and React Native

i. One can use React for creating websites, SPAs, web apps, etc.
ii. A Javascript library, React, can be used for creating the UI hierarchy.
iii. Considered as the V part of the MVC framework, it is responsible for the rendering of UI components.
iv. Since the virtual DOM refreshes only parts of the page, React’s virtual DOM is faster than the conventional full refresh model, thus decreases the page refresh time.
v. Moreover, React uses components as the basic units of UI, which can be further used again to save coding time.
vi. Easy to learn & simple to work with

To understand ReactJS better: it's very important to understand these three terms. So, let’s begin:

To write views using syntax resembling HTML and XML: it is the JSX extension of JavaScript that allows developers to control the logic.

Redux is nothing but a state management library with a vibrant ecosystem that it is often paired with ReactJS.

What Can You Build in ReactJS?

Initially, just think of Facebook. Like we said above, it's made with ReactJS. There was a time in 2012 when Facebook Ads became challenging to manage as the social network's web application was larger and included more components.
At that time, Mark Zuckerberg stated that relying on HTML5 was one of the biggest mistakes of their organization, and also promised to the users that Facebook would deliver great mobile experiences soon. And, meanwhile, the corporation also acquired Instagram. Further, when in May 2013, ReactJS was officially launched, since then ReactJS is taking over.
Some of the biggest and most successful digital products are incorporating ReactJS into their stack, and also new products are being made using it. There are many world’s most renowned applications there in the list like:
a. Social networks (Facebook, Instagram, Pinterest, Twitter)
b. Sharing economy platforms (Airbnb, Lyft, Uber)
c. Media sites (Yahoo!)
d. Video platforms (Netflix)
e. SaaS tools (SendGrid, Asana, InVisionApp, Zapier)
It could be said that Facebook created React for their purposes, and most of their mobile and web apps are written using React. At the moment, the social network Facebook is in the process of rebuilding the whole platform with React, Relay, and GraphQL.

Reasons Why React JS Development Services are an Ideal Choice

1. Easy to Use and Learn

In comparison to other JavaScript frameworks, React JS is the simplest and most direct one. And almost every developer finds it easy to use and easy to learn for front-end development.
Here the word direct signifies refers that the React JS developers can use direct JavaScript for building a mobile or web app. And, because of this, development by React JS costs very low. Hence we can say it offers another benefit by reducing the cost of development.

Along with being easy to learn, one can start working with the ReactJS.
Created by Facebook, React is a lightweight JS library that only deals with the view layer. And, like other MVC frameworks such as Angular or Ember, it is not much complex. If one knows Javascript, an OOP scripting language, then they can easily understand the basics and start development on web applications after only a couple of days studying tutorials.

Nowadays, the quality of the user interface plays an important role in an application. There is no doubt that there is a very low chance of an app getting success, especially if the user interface is poorly designed.
But at the same time, if an application has high-quality and responsive UI, then there are better chances that your users will love to use the app.
Hence, for any application, building rich user interfaces is a sort of requirement to survive and thrive. And here comes React JS as a solution because it enables developers to build such high-quality, rich user interfaces through its declarative components.

As we mentioned above that React comes with JSX, an optional syntax extension that helps to write your components. Making all subcomponent rendering a delightful experience for developers: these components accept HTML quoting.
Even though there are several debates on the function of JSX, but it can already write custom components, convert HTML mockups into ReactElement trees, and build high-volume applications.

There are components in React JS of memory information structures that developers use to update as well as modify an app. Hence, it makes it further easier to render the components along with the information.

On the server, developers benefit from the speed of development by using individual components of an app. And, as there is also no rewriting needed, it saves time as well.

It is an undeniable fact that search engine optimization is the gateway to success for any online business. Based on the reports from Moz, the minimum the page load time and the faster the rendering speed, and as a result, the higher an app will rank on Google.
And, it is great to have the fast rendering because React significantly reduces the page load time compared to other frameworks, which greatly helps businesses in securing the first rank on Google Search Engine Result Page.

We all know that learning emerging technologies and further using them in real-life projects can be both fun as well as beneficial, but only if you use them correctly.
And, we can say that Facebook understands this fact; hence, for this reason, they have added much needed React dev tools and Chrome dev tools in their React JS framework.
So, these React tools help developers discover child and parent components, observe hierarchies of components, and also inspect present state and props of the components.

It is a proven fact that when an app has a complex logic, and when a single modification in one component can dramatically affect other components, then frequent updates often turn into headaches. But to solve this problem, Facebook has amplified React with the component reusability feature to combat this problem.
In React, the reusability of Component enables developers to redeploy the same digital objects. And, as its best, the process is not so complex. Yes, for example, the developers can start adding simple components such as buttons, checkbox, and text fields and then move them to wrapper components, which are later moved forward to the root component.
As each component in React has its internal logic, this procedure offers better code maintenance and growth, which is easy to manipulate, and as a result, boosts the productivity of application development.

Similar to Angular, there is one very strong community support for React, and it could be said that it is one of the main reasons to adopt React JS in your project.
Making React a better frontend framework, a large number of individual React developers are contributing towards every day. If we talk about the stats, React JS has attained more than 1 lakh stars on Github and 1,300+ regular contributors.
Apart from that, several experts are also regularly uploading free tutorials on Youtube regarding React and also writing in-depth React tutorial articles & blogs on the internet. For example, if you search for a simple “React tutorial” on Google, it will give 10,00,00,000+ results.
Moreover, React experts are also solving doubts on QA sites like Quora and  Stack Overflow,  regularly. That indicates you can always get reliable solutions given by experts if you ever get stuck while using React.

After learning it all, we can say that the brand names that have invested in React Native for their mobile apps add a lot of credibility to this framework. Moreover, its features and benefits give all the more reasons for using it for cross-platform app development.
However, to avail of the best benefits it offers, every business needs to partner with experts. At Covetus, we, as an industry leader, have an expert developer team that not only extends React Native application development services but also attains skills to work with this framework efficiently to build apps that add value to your business.
So, connect with us, share your requirements, and get the perfect solution for business right now.

Native, Hybrid & Web Apps: Choose the Best for Your Business