Native, Hybrid & Web Apps: Choose the Best for Your Business 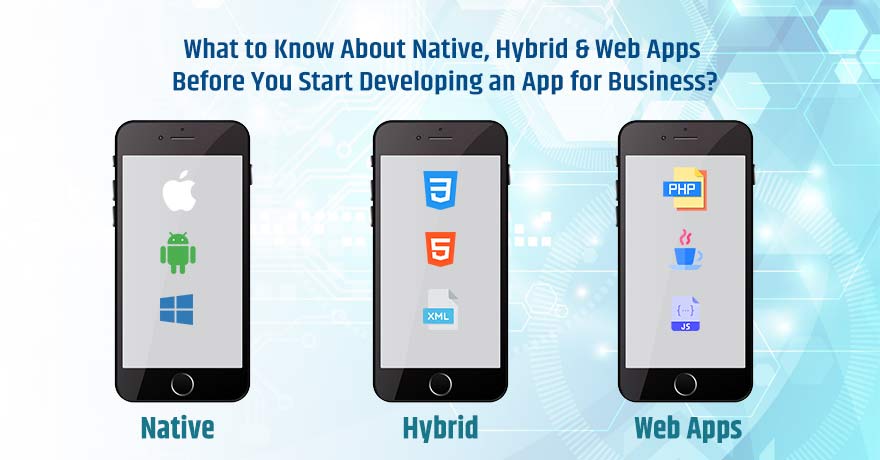 Nowadays, people are focusing more on applications rather than the desktop versions. In the past year, mobile applications have become the most important tool for a business to grow. They have made it easier for people to get the information instantly and also to stay connected with their favorite brand 24*7.
The app is an easy and effective tool for businesses to expand their reach to any part of the world. But the moment you decide to work on the app, you face several challenges. Focusing equally on technical, designing, and marketing is a must for an app. You can’t target only one element and leave the rest.
Changing the platforms or app type could reduce your work efforts and could benefit you in the long run. One of the common questions that you would come across while building an app is which app type to choose for success? Also, what are Hybrid, Native, and Web Apps? The most important question is- how to select the appropriate app type for business?
So before we know the pros and cons of every app type, let us know why these app types are essential for the growth of any business.

Why is Selecting the Right Native, Hybrid, or Web Apps Essential for Business?

1. Like the desktop version, an app needs a proper dedication. Selecting the ideal app type would help you in the long run. It would manage the need for maintenance and the ease of future releases.
2. App costs could vary from platform to platform. Therefore, choose the right app type from the beginning and ensure that you design the app in your budget is very important.
3. Everyone is addicted to mobile phones, and it helps people to get connected more easily. So, it is the best option to build an app if you want to reach people wherever they go.

What are Native Apps?

What do you understand by Native App?  It is an app that can be accessed through icons present on the device’s home screen. These apps are designed for one platform and could be installed through Google Play Store or Apple’s App Store.
The Native Apps use camera, contacts, the compass,  and GPS, and more. It could provide optimized performance and make the best use of the latest technology. A few of the Native apps could use the device notification system and could work offline.

Pros and Cons of Native Apps

Below described are a few pros and cons of developing native apps.

Native apps work faster as they are native to the platform. Also, a few elements of the native app come preloaded and work with device built-in-features; therefore, they are speedy.

It could work without internet connectivity. If you get stuck in a situation where you can’t access the internet, native apps could work for you.

4. They Offer a Great Performance

They offer a high level of performance. Native Apps are responsive and are compiled using programming languages and APIs. They are secure and reliable than other apps.

While native apps have advantages, it has drawbacks too.

a. Downloading a Native App is a Lengthy Process

It has multiple code bases because every device has its version of the app. Downloading the native app is a lengthy process. It involves a few steps, such as going to the application, accepting its terms and conditions, and then downloading it.

b. Hire Team of Skilled Developers

If you own a business, then you have to hire two teams of the native app developers: one for Android and another for iOS. You would need skilled developers to win the hearts of the users.

c. It is Costlier than Other Apps

Native apps need development on every platform; therefore, this involves more funding. In Native apps, developers need to code for one platform at a time. Also, they have to do separate coding for iOS and Android.

d. It is Time Consuming

Since the developers have to code separately for the platforms, the app needs more time. On average, it takes 18-20 days to build an effective native app.

What are Web Apps?

Web Apps are similar to websites because of their functionality and interactivity. The run-in browsers can’t be downloaded like native apps. The majority of web apps are developed using CSS, JavaScript, and HTML5.
The web app is a program saved on the server and delivered over the internet through a browser interface. It can be developed for a wide variety of uses and can be used by anyone, including organization and individual. Web Apps can be accessed through Mozilla Firefox and Google Chrome.

Web apps can be accessed from anywhere at any time. Also, web apps are compatible with any platform or device. Know more pros of web apps below.

Web apps are cost-effective. They could be accessed via a uniform environment. There is no need to test and to develop web applications on system versions. The application needs to be developed only for a single platform.

2. Web Apps Can be Customized Easily

Web applications are easier to customize. The customization makes the app look effective and also allows the customization for particular groups and people. So, with web apps, you don’t have to use the same interface all the time.

3. Easy to Install and Maintain

Web apps are easy to maintain and are less complicated. There is no need to upgrade the PC after the new version is installed on the host server. The upgrades are performed only on servers, so the results are more reliable and predictable.

Web applications are more reliable as you don’t have to monitor thousands of computers like in desktop applications. Thus, security is tighter, and the apps are managed by professional service administrators.

Overall, Web apps are easy to maintain, easier to develop, and more useful for users. But it also has a few drawbacks like:

Web apps are accessed through the internet, so these apps are slower. Also, if you lose internet connection, you won’t be able to access the app.

b. It Might Not be Compatible with All Browsers

Not everyone uses the same browsers. So, the developers need to ensure that their web apps should be compatible across all browsers. Furthermore, the web app might not look good on certain browsers. These apps don’t run well on old browsers and older devices.

What are Hybrid Apps?

Hybrid Apps are a mix of web and native apps. They are similar to web apps but are installed on the device like native apps. These apps have access to the Application Program Interface (API); therefore, the app uses the camera, storage, GPS, and more. Hybrid apps are built with CSS, Javascript, and run in a web view.
These apps are built on a specific platform/framework. A few native apps could work offline, but hybrid apps don’t have this functionality. They are based on web apps and contain elements similar to web applications. Before you start developing a hybrid app, know the benefits and drawbacks (if any) of using it.

Hybrid apps are easier to develop as most development in this app is done using standard technologies. The hybrid apps share common code for native platforms. Also, the more platforms you target, the more cost-effective the hybrid apps would be.

2. Easy to Maintain and Scale

As the single application runs on several platforms, you have to check a single application; thus, a hybrid app is easier to maintain. This also decreases costs and saves money.
These apps are built to work with different OSs, so it is easy to keep an eye from time to time. The apps are flexible and are open to third party plug-ins that help you to adapt to the latest trends.

3. These Apps Could be Put on Multiple Platforms

What attracts people to use the hybrid app is its stage availability. You can put your hybrid app on Play Store, App Store, and more, as they are compatible with these versions.
Putting your app on different platforms means you are expanding your business by writing the code once. These apps are popular as they allow cross-platform development and reduce development costs.

These apps provide smooth user experience across Android platforms and iOS. The hybrid app UI loads the content and graphics in no time. Also, the enhanced UI improves the chances of hybrid app approval at the google play store or app store.
With the hybrid app, you can provide awesome performance to users. This makes it the first choice of businesses that are looking for engagement on both Android and iOS.

Hybrid apps have the native infrastructure and could work offline. However, when you are offline, the data couldn’t be updated, but still, you can load the app and view previously loaded data.
Data, be it a form or survey, could be stored and sent to servers when you get connected to the internet.

Besides, so many advantages, hybrid apps also lack at some points. It has certain limitations. A few of them are:

As the content of the hybrid app is based on web technology, it loads slower than the native app. But you don’t have to worry as this could be managed by using some latest methods.
Its performance could be affected as it depends on the quality of the web view that runs the JavaScript code. These apps add an extra layer between the mobile platform and source code; thus, there is a possibility of a loss of performance.

b. Cross-Platform Development is Difficult

c. Developers Have to Learn More About the Errors

In hybrid apps, the developers have to be dependent on the framework and play well with the OS. Sometimes the developers don’t have a deep knowledge of the platform; therefore, knowing the exact cause of the error could be a long process.

With competition growing every day in the digital market, it is important to know about the app type that is budget-friendly plus feasible to all.
Each of the app types described above has its benefits and drawbacks. Analyze your business, what type of app would suit you, and what should be done next to compete in the market. Do not build the app the way your competitors have designed.
Research on your business, make a layout of what you need and what could be left for later, ask the experts, read related posts, and then decide which app type would match your business.

How a Successful Business Uses Animation in UI Design?