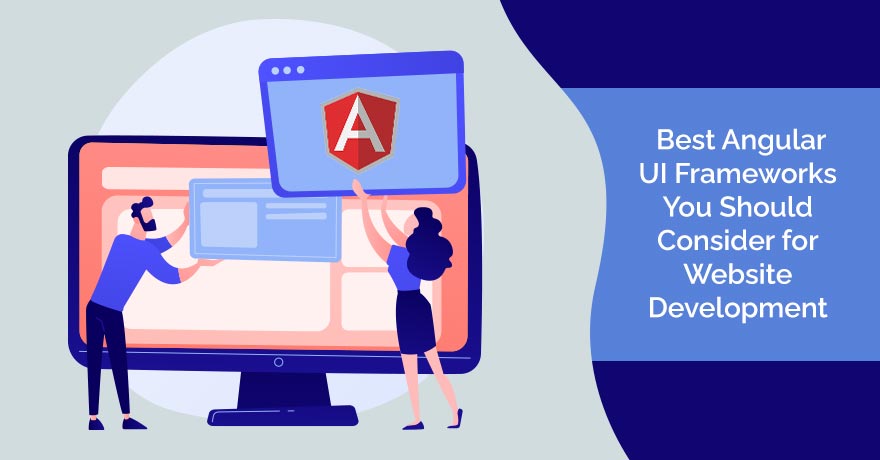 When it comes to web development, several technologies are introduced every day. Also, web development companies look for the best frameworks to deliver a smooth user experience. Frameworks like Ionic, PrimeNG, Angular Material, and more are getting popular for delivering advanced features and a user-friendly experience.
According to market analysis, AngularJS provides a lot of configuration and has become a crucial part of the web industry. By utilizing the attributes of Angular JS, the developers can make different frameworks for creating applications.
Let us know about Angular features and what it offers for web developers.

It is the frontend framework for mobile and desktop applications. In general, it is a typescript based open source web application framework by the Angular team and has a community of corporations and individuals. AngularJS has several unique features and is considered to be a powerful tool for the development of dynamic websites.

It redefines the modern Javascript virtual machine by transforming templates into codes. The loading time of Angular JS is faster in comparison to other frameworks in the industry. Also, the code gets split according to the user's loading and rendering requirements.

The Model-View Architecture is an important feature of AngularJS. It increases the value of the framework for client-side application development and also focuses on data binding and scopes.
In MVC architecture, you can easily split the app accordingly and write code to connect the same. In Angular, the developers only have to split the application into MVC, and the rest process is done on its own. Therefore, it saves coding time.

Another important feature of AngularJS is two-way binding. A one-way binding allows you to modify the value in the model to reflect that change. With AngularJS and two-way binding, you can change model and view as well by changing in value anywhere.

The Angular CLI features SCSS support and routing and supports the developers in discovering new features at ease. The basic CLI of angular is, ngNew creates a new workplace with this command. The ng Serve allows you to test the Angular App on a local server.

Ionic is an open-source SDK for hybrid mobile app development. It offers tools and services for developing hybrid mobile and progressive web apps based on web development technologies. It is an optimized and robust front-end framework to build mobile applications.
It includes typography and an extensible base theme. Furthermore, it provides CLI to create projects and allows developers to add Cordova plugins and front-end packages. It runs with a combination of native code and web code and gives full access to native functionality.
It can be deployed across multiple platforms like Desktop, Android, and native iOS. Ionic is built on standard web technologies like CSS and Javascript and can be accessible to anyone who knows web development skills.

It is a combination of rich UI components with over 70 easy-to-use UI components. Right from widgets to pre-built themes, Primeng has a lot to offer for web developers. The widgets are free and open-source under the MIT license.
It features menu components like BreadCrumb, Megamenu, alert messages, split button, and advanced components like drag and drop.

It is a software framework with input validation, data adapters, and MVVM support. JQWidget is built on open and standard technologies like jQuery and CSS.
It features code reusability and can create its components. It has over 60 UI components to utilize in angular projects.
It features a framework with professional Javascript components and MVVM support. It enables responsive web development and helps you create websites that look impressive on desktops, smartphones, and tablets.

It is an open-source design system that brings angular components and CSS frameworks together for a brilliant performance. Clarity’s designs are built into HTML/CSS components and can be used regardless of the Javascript framework.
Additionally, it offers a set of well-designed data-bound components built on top of angular. Angular components of Clarity include Tree View, Tooltips, Stack view, and Alerts.

LumX is a popular front-end framework based on Google material design. It allows developers to build user interfaces and under Google guidelines. It depends on Angular JS to support the development of web applications based on MVC design pattern. It is a responsive framework for creating impressive apps and websites.
It uses SaaS and a bit of jQuery for making applications easier. It is a preferred choice of developers for creating feature-rich customizable apps. LumX is excellent for customizing your Angular web application design. Furthermore, it also improves web application performance by optimizing SaaS and JS files with LumX uses jQuery but without any plugin.

It provides essential mobile components that are not found in Bootstrap 3. It depends on robust libraries like overthrow.js and fastclick.js to deliver a better mobile experience.
It retains most of the Bootstrap 3 syntax and brings an existing desktop web app to mobile. It is the most trusted framework by developers and companies across the globe.
It has cool components like Navbars and makes use of the top and bottom portion of the screen. It has scrollable areas and makes the app user friendly. Modals and Overlays show a pop-type window on your screen. The sidebars occupy the left and right sides of the screen.

It uses web components to expand the standard HTML syntax to help you build apps navigation. It consists of Javascript and CSS that we use with a framework and is also referred to as an agnostic framework.
It simplifies the HTML apps and is integrated with Angular JS. It works along with AppGyver and also allows users to write HTML together with CSS components.

It is a framework to develop video apps built on top of Angular. It is different from other video players. It provides a simple solution to every problem.
It features no support for Flash and makes the code faster. With VideoGular, you don’t have to write Javascript to create a player.
Also, you can create plugins via an intermediate API. Thanks to the API, you can create your components to play timers, sliders and use the same controls. Furthermore, it got features like a cue point system, themes, and bindable properties.

Kendo UI angular comprises a set of ready-to-use features and covers everything, right from sorting to filtering and grouping to row virtualization. It is a professional grade Angular UI component and offers exceptional features. It can be installed easily and offers flexible themes and theme builder.

DevExtreme ate editable samples with different libraries and technologies. It is simple to use and can be used in real apps. It is a set of enterprise-ready UI component suites for React, Vue, and jQuery.
It is a commercial application framework made by DevExpress. The controls are designed to provide functionality in any browser.

Bootstrap and Angular are incredible tools that have changed the way JS works on the frontend. Bootstrap is an open-source CSS framework and mobile-first front-end web development. It includes CSS and JavaScript-based design templates for buttons, navigation, and other components.
Bootstrap is a CSS and JS library and focuses on simplifying the development of web pages. It also comes with several components in the form of jQuery plugins. It provides user interface elements such as tooltips and carousels. The Bootstrap components consist of CSS declarations and Javascript code.

NG Bootstrap is a set of directives and components that wrap the latest version of Bootstrap. It depends on Bootstrap’s CSS being available and has no dependencies on 3rd party JS.
Angular UI components include Accordion, Buttons, Dropdown, Tooltip, and Type Head. The majority of its features are the same as ngx-bootstrap, with different projects. It is still under development while ngx bootstrap is stable. It features different data components like Tree table, DataList, and more. It has overlay components like an over panel and lightbox.

Amexio is an angular UI automation platform and quality codebase. It features drag and drop comments, and offers 70+built-in themes, and has D3 charts. Furthermore, it offers material design support and contextual menus, and SASS. It focuses on UI component development and security with a modular architecture.

These are the best Angular UI frameworks for web development and can be chosen according to requirements.
We, at Covetus, have a team of experts who are well-versed in working on different technologies. We develop highly functional websites so that you can meet your goals. We offer a flexible engagement module and have 15+ years of experience in the IT business.
Furthermore, we deliver responsive PHP websites created by our experienced PHP developers. We offer secure services with a high-quality SSL to ensure your data security.

Health 2.0: Types of Web 2.0 Technologies in the Healthcare Industry