Why is Flutter the Best SDK for Developing Multi-Platform Apps? 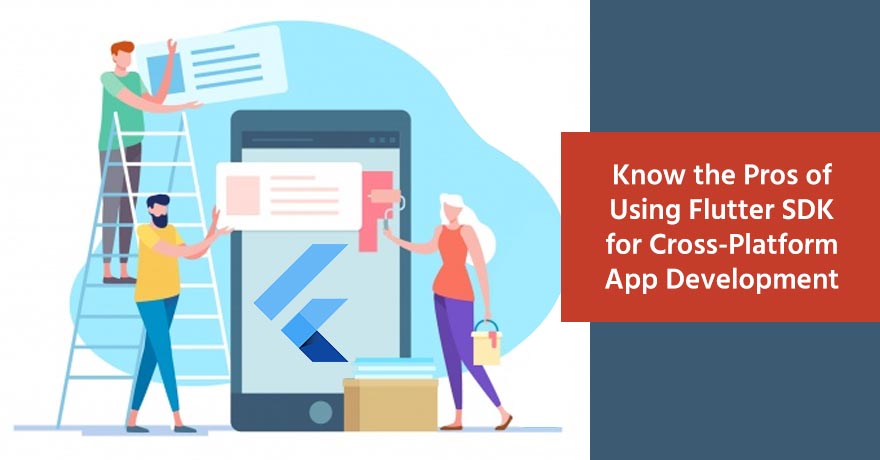 If you are a developer or have a keen interest in mobile applications, then you would know that Flutter is in demand for developing amazing iOS and Android apps. It is a great open-source UI software development kit created by Google and is used to develop applications for multiple platforms.
The beginners often consider it as a framework, but it is a complete software development kit (SDK) and contains everything that you would need to create cross-platform applications. It also includes testing and integration APIs, command-line tools, and rendering engine.
So, if you are looking for new hacks to upgrade your mobile application, then you must give a try to Flutter. Let us understand more about flutter’s benefits and limitations for business.

The first version of Flutter was called Sky and ran on Android. After the launch of Android P, a new OS, Google released its new SDK and named it Google flutter. It is a revolutionary project and an advanced version of the Android SDK.
Developers prefer using Flutter because it allows them to create apps with a single coding process. It was initially introduced in 2017 but the Alpha version. Later, it was officially launched in 2018 with advanced features.

The components of flutter include foundation library, flutter engine, Dart platform, and widgets. Here is a quick overview of this SDK.

It is a client-optimized programming language, object-oriented, and class-based with C-style syntax, which is used for apps on different platforms.
It is used to build desktop and web applications. It supports abstract classes, type inference, and mixins.
Flutter runs in the Dart virtual machine and features a just-in-time execution engine. Release versions of apps are compiled with AOT compilation on both iOS and Android.

Flutter engine, written in C++, provides support using Google’s skia graphics library. It is a portable runtime for hosting several flutter applications. It has core libraries, including graphics, plugin architecture, compile toolchain, and more.
Most developers interact with Flutter through the reactive framework and foundation widgets.

Written in Dart, the foundation library provides functions that are used to construct applications through APIs to communicate with engines. Complex widgets could be created with foundation widgets easily. However, the use of widgets is strictly not required to build flutter apps.
Foundation library methods could be used to draw text, imagery, and shapes to the canvas. The flutter framework contains two types of widgets. Material Design widgets implement design language of the same name, and Cupertino widgets implement iOS Human Interface guidelines.

Flutter has attracted a large community of developers and app owners. In comparison to other platforms, Flutter is advanced and has better features. Take a look at its features and reasons why it should be considered for your next project.

Flutter is an open-source project, making it easily available for use and study for any purpose. It is easily accessible and user friendly. It is open-source, therefore, gives a diverse scope for design and provides documentation and support to help with any issue.

Flutter has amazing features that make changes instantly without disturbing the current application state. This makes flutter app development time faster due to increased speed.
Additionally, the flutter community has put effort into providing several ready-to-use widgets. Other app platforms are time-consuming, but with flutter, the process becomes faster and easier.

Application performance plays a crucial role in good UX. Undoubtedly, Flutter application performance is better than native apps in complex UI animation scenarios. Flutter does not rely on code representations and is built-in machine code.
This eliminates the bugs during the process. It has a huge collection of structural and amazing widgets to create apps with stunning UIs. However, native apps are considered to be the future of mobile applications for several reasons.
Firstly, they are secure, and secondly, native apps deliver the best performance. Also, the flutter app is close to native applications and offers several advantages to developers.

Dart is not similar to Java, but it has a few features like Java. This makes it easier for developers to take shifts. The mobile app development flutter has a better widget and excellent editorial integrations, making the SDK an ideal choice to develop apps.
Dart compiles into native code, and Flutter is the only native mobile SDK that offers reactive views without any need for the Javascript bridge.

With Flutter, the developers could instantly view the changes that are made on emulators and hardware. They do not have to restart the app, and the changes in the code could be done while the app is running. This is great not for building UIs, but also for bug fixing.
Also, flutter is a preferred choice of developers because there is no need to learn a programming language. If the developers know the object-oriented language, then it would be better to work with flutter. However, non-programmers could also create applications easily while working with Flutter.

6. Single Code is Used for Back and Front End

The client optimized programming language, Dart, is used for developing code for flutter and runs on multiple platforms. It uses a common language for Back end and Front end and uses a reactive framework. Working with Flutter is easy for developers as they do not have to code separately for front and back end.
Earlier, developers have to create apps separately for iOS and Android devices. But now, the trend is changed, and with flutter, the developers could create better quality apps for multiple platforms with minimum errors.

It has a single codebase; therefore, the app testing becomes faster with Flutter. This makes the work easier for the Quality Assurance team, as they have to test only one application. It offers more benefits to development teams. Also, the process of documentation is improved in Flutter.
By looking at the advantages, it is sure that Flutter would stay in the long run.

Limitations When You are Using Flutter

While working with flutter is easier than other libraries, and also a preferred choice of developers, it has certain limitations too.

1. Not Supported by Browsers

Unfortunately, flutter is not meant for web browsers. It only serves mobile applications. So, if you have to choose the technology stack you want to work with, this could affect your decision.
Also, if you want maximum device feasibility, then Flutter should not be your first choice. However, it supports advertisements, inline videos, and charts.

Flutter is new; therefore, the library is limited. The developers couldn’t find every functionality they are looking for. Contrary to this, native apps have everything in their SDKs and offer streaming services such as UStream. The developers might have to build libraries, and this could be time-consuming.
Also, note that flutter doesn’t support-third party libraries and increases the programming task. But, if an app is properly planned, then you might find flutter as the best solution for your requirement.

3. The Size of the Apps Matter

Flutter-made apps are created using built-in-widgets and not through platform widgets;  therefore, the size is bigger. The smallest app size that could be made with flutter should not be less than 4MB. However, the Google team is continuously working to optimize it.

4. It is Not Mature Enough to Handle E-commerce Applications

Flutter might experience problems with the latest technologies. It could not cope with the changes in the UI of Android and iOS. For instance, some developers find that flutter is not good enough to handle e-commerce applications.

Flutter is Beneficial for Startups and Tech Companies

Flutter is, currently, one of the best tools to build an application. It could be beneficial for startups, tech-related companies, e-commerce, and other businesses. It is best for programmers because it makes coding faster and efficient.
Furthermore, it could be a great choice for designers who want to build effective applications that could meet the standards of mobile platforms.

Flutter is a great choice when you have to deliver high-performance and amazing apps that could meet the client's requirements. It is worth considering to build iOS and Android apps. Plus, it is cost-effective too. Furthermore, it is the easiest way to deliver a valuable cross-platform hybrid mobile application.
If you are looking for the best development company to build apps with flutter, then Covetus could help you build wonderful apps while working with the latest technologies.

10 Crucial Factors to Consider to Make Your Mobile Application Secure