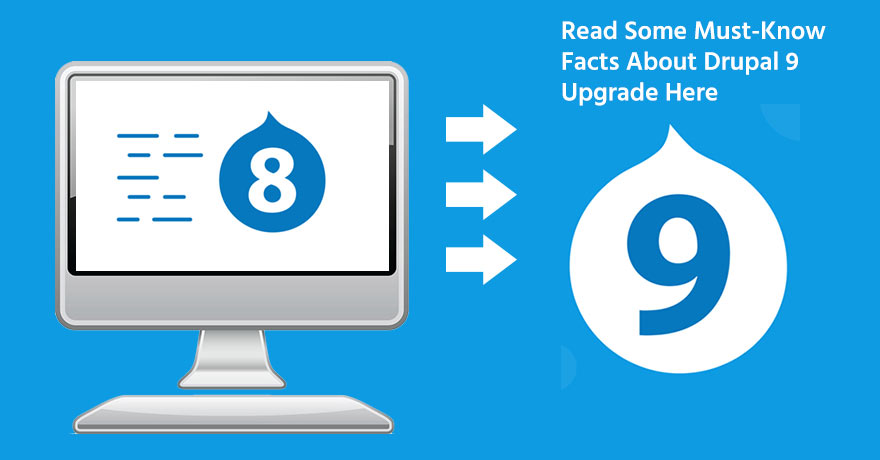 In this era where content management is in high popularity, Drupal is one of the top Content Management Systems available on the web. Lean and powerful, it’s perfect for enterprise business sites that need to maximize their performance. Maybe, you will find diving into Drupal daunting at first glance, but fortunately, there are ways to demystify Drupal.
And, despite its steep learning curve, you don’t need to have a deep technical background to master it. Yes, anyone can work on this CMS effectively with a beginner’s skills and a little patience.
Moreover, due to its huge demand, the developer keeps updating the free and open-source content management framework. Yes, and soon in June 2020, they will release Drupal 9. At the same time, it has been announced that November 2021 is the deadline for end-of-life (EOL) of Drupal 8 and Drupal 7 versions. So, the Drupal upgrade is impending sooner rather than later, especially if you are already using this platform.
But there are some facts that you need to know before you opt for the same, so you will be able to make the transition seamless and smooth. So, let’s learn them all one by one. But before that, let’s have a brief knowledge that what is a Content Management System and hat Drupal is to understand well.

A software tool that lets users add, remove, edit, or publish content from a website, using a web browser on a tablet, desktop computer, or smartphone is what we call a content management system (CMS). Usually, the CMS software’s scripts (as it is written in a scripting language) run on a computer where a database and a web server are installed.
The settings and content for the website are normally stored in a database. And for each page, the scripts combine information from the database and assets to build the website pages.
The combination of the operating system that the CMS runs on,  the database it stores its information in, the scripting language it is written in, and the web-server that runs the scripts to retrieve information and return it to the site visitor’s web browser is what we call as the stack.
Well, to define stack, it is the commonly used combination of the Linux operating system, MySQL database, Apache web server, and PHP scripting language, which is also known as the LAMP stack.

Like we mentioned before as well that Drupal is a flexible CMS, add to that, it is based on the LAMP stack with a modular design enabling features to be removed or added by installing and uninstalling modules and also enabling the entire look and feel of the website to be modified just by installing and uninstalling themes.
The base Drupal download, also called Drupal Core, includes the PHP scripts required to run the basic CMS functionality, various optional modules, and themes, and many JavaScript, CSS, as well as image assets. To download additional modules and themes, one can go to the Drupal.org website.
We can also run Drupal on the other technology stacks:
1. The operating system can be Mac OS or Windows instead of Linux.
2. Rather than Apache, the web-server can be IIS or Nginx.
3. Instead of MySQL or a MySQL-compatible replacement such as MariaDB or Percona, the database can be PostgreSQL or SQLite.
Other operating systems, databases, and web servers can also be made to work; yet, the scripts that the software uses are written in PHP; hence that cannot be altered.

It is reported that code clean-up is one of the primary reasons for a major release. Where minor releases occur every six months, Drupal 8 came with an innovative model. And, this has enhanced the number of new features being added to the CMS.
Plus, new and improved ways to solve problems are being implemented, and code is deprecated as features are added. Even though the deprecated code is needed for backward compatibility, but a major release of Drupal 9 offers an opportunity to abolish this code and anything else that is no longer required.
Another reason behind the major release relates to third-party dependencies. Now that this CMS system integrates with common PHP projects like Symfony and  Twig, it needs to adhere to the vendor support lifecycles for these projects. So, we’ll have supported versions of software with the release of Drupal 9, which will be around for a long time, such as Symfony ⅘ and  Twig 2.

When Do We Need to Upgrade to Drupal 9?

Since the announcement happened, almost everyone has this doubt that when they need to upgrade to Drupal 9. Well, there is some time. Yes, according to reports, Drupal 8.8 is all set to be launched in December 2019,  and this will be the last minor release with features. Then further in June 2020, Drupal 8.9 and 9.0 will be released and will contain the same features.
And, the major difference in Drupal 9 will be that it will have deprecated code removed. Then in November 2021, Drupal 8 will reach the end of life and at the same time as Symfony 3 will too. It could be said that existing Drupal-8 sites will have a year and a half to upgrade to Drupal 9.

How to Know if You are Using Deprecated Code?

To help identify deprecated code: there are a few tools that can be used. And the most popular one is drupal-check. So, it is one command-line utility that one can run against the modules and be alert about the instances of deprecated code.
Besides that, one other helpful  tool is “Drupal 9 Readiness,” shared module required to ship with Drupal 8.8. It will be GUI-based tool developers, and users can run from within the Drupal user interface to easily determine what it will take to prepare their site for Drupal 9.

It is one good news for sites running on the previous version with the Drupal 9 Upgrade that it is going to be easy, as it’s easy to move over from one minor release to another. Besides that, it is very easy to upgrade from 7 to 8 versions.
And, the only aspect that you need to prioritize is to manage the deprecated code well enough. Ideally, you are good to go when you keep the Drupal-8 site up to date because upgrading will be a breeze if the site is not using deprecated code scheduled for removal in the new version.

2. More About Code Cleanup Instead of Just More Features

As we already mentioned above, the new version will have almost the same features as Drupal 8, except those related to the updated dependencies. Yes, this new version will be more about code cleanup.
According to the reports, the concept behind this up-gradation is that the minor releases that come every six months cause acceleration in new features, and this all ends up to code deprecation.
But now, with the new version release, there will be an opportunity for the removal of the deprecated code and everything redundant.
Besides that, the release also relates to third-party dependencies. It will support versions like Symfony ⅘ and Twig 2, which will probably be there for a long time to come.

3. Reasons Showing Why Support for Drupal 7 & 8 is Ending

The release of the next version might appear to be too early since Drupal 8.8 is lined up for release in December 2019, and then again, there will also be 8.9 in 2020. Furthermore, Drupal 9 will not have many new features, but only the deprecated code will be removed. Still,  for the EOL of the last versions, there are some good reasons to retain.
Drupal 8, which will be reaching its EOL in November 2021, has a dependency on Symfony 3. It defines that after this date, support will not be available for fixing any bugs in Symfony 3. And, as an outcome, there will be a threat to Drupal 7 and 8 sites as well, hence justifying their EOL date.

4. Easy to Identify Deprecated Code on the Current Site

As the upgrading will be all about the removal of the deprecated code from the site running on the current version, identification of such code is the first step you need to take. As we have already mentioned tools that can help, the best approach would be to hire a Drupal developer to handle it for you.
Besides that, Drupal-check is available right now, while the 8.8 release will offer a module called Drupal 9 Readiness for this purpose. To determine how they can get their site ready for the upgrade: these GUI-based tools will help developers and users.

For sites running on Drupal 8, there is nothing much to worry about the upgrade, but what about the ones using Drupal 7. Well, there are two alternatives to explore if you own one of them:
At present, you can stay on the same version but update your PHP version. But after the EOL in 2021, if you choose to run on Drupal 7, signing up for Vendor Extended Support is recommended to future-proof your site against issues and bugs. Because according to reports, extended support will be available only up till 2024.
Another alternative would be to create a route for migrating to Drupal 9 by embracing the Drupal 8 version in the future. As with this, you can get rid of the deprecated code, and moving on it will simplify things for you at the EOL stage.
Besides that, you can also choose to move straight away from Drupal 7 to 9 at the time of the latter’s release or the former’s EOL. But among all three options, the choice is yours.

We can’t deny the fact that both the release of Drupal 9 and EOL of the preceding versions are big events for the platform. Organizations can come up with a road map as a part of their long-term strategy as there is still some time left to the EOL while the next launch comes earlier by a year and a half.
Also, if you are currently on Drupal 7 or 8 and would jump directly from D7 to D9 or follow a more clear path from D7 to D8 and subsequently D9, planning depends greatly on the individual circumstances.
However, for all this, collaborating with a Drupal development company will be one best step to take as it comes with a strategy to implement it well. Because they can guide you about the most feasible approach based on your requirements, and can also put it into action as well.
So, if you are also looking for wondering to find out the right technology partner to assure a seamless upgrade for your site, Covetus can be the right choice. We have a team of experienced Drupal developers who easily handhold you through the journey and make it a successful one. Connect with us, and we will help you with the right solution for your business.

Google to Ban 'Less Secure Apps,’ Learn How You Can Secure Your App