9 Programming Languages That Will Make a Major Impact in 2021 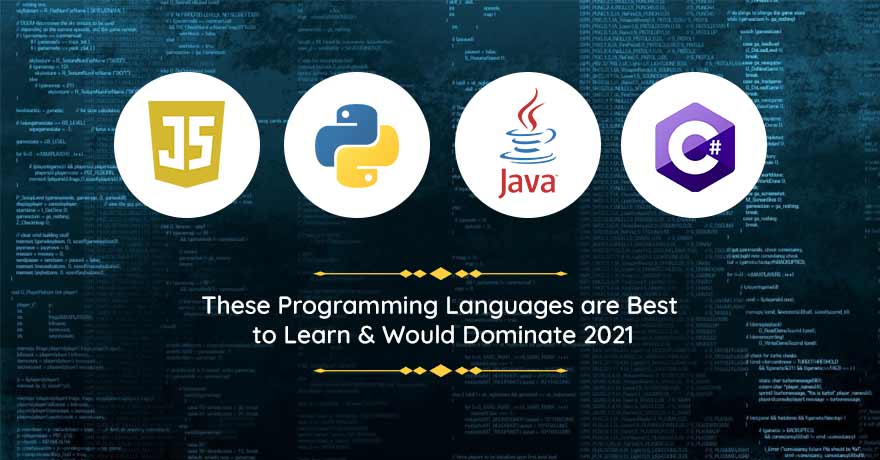 It is a programming language that enables interactive web pages and is an important part of web applications. The majority of websites use Javascript for client-side pages, and the major web browsers have a dedicated javascript engine.
The language is known for adding responsive elements on web pages, and it has a range of applications such as web development, mobile application development, and more. It is very fast as it runs immediately within the client browsers.
It is easy to learn and can be used in multiple applications like Pearl and PHP. Furthermore, it is used on the web and is unhindered by network calls to a backend server. It validates the user input and saves server traffic.

Python is a high-level and general-purpose programming language. In January 2021, Python ranked third in TIOBE’s index of most programming languages after C and Java. It is versatile, easy to use, and is fast to develop. It focuses on code readability and is well-structured.
It is a multi-purpose dynamic programming language and helps the programmers to code easily. It provides standard libraries and includes the areas like web service tools, operating system interfaces, and string operations. The majority of the programming tasks are scripted into it and limit the length of the codes to be written in Python.
It integrates the Enterprise Application Integration and makes it easy to develop Web Services. It also processes XML and other markup languages as it runs on modern operating systems. It has clean object-oriented designs and increases programmer’s productivity while using different languages like C++ and C#. It uses dynamic typing and is a combination of reference counting and features dynamic name resolution.

Java is an object-oriented programming language designed to have as few implementation dependencies as possible. It was originally developed by James Gosling and was released in 1995 as a component of Sun Microsystems Java platform. It is robust and secure. Java is the popular choice in the organization and is majorly used for building enterprise-scale web applications.
It is platform-independent and object-oriented. It allows you to form standard programs and reusable code. It can run on any machine and doesn’t need software to be installed. It has no explicit pointer and has a security manager that defines the access of classes.
It is widely used in Android development along with desktop applications and scientific applications. It allows the users to download untrusted code over a network and run it in a secure environment. It is dynamic and extensible and is organized in modular object-oriented units called classes. Also, the Java application can dynamically extend itself by loading new classes over a network.

C# is a multi-paradigm programming language and contains strong typing, declarative, functional, and object-oriented programming disciplines. It supports modern functionality and features operator overloading and preprocessors directives.
It is open-source and runs on Mac, Linux, and Windows. It supports nullable and non-nullable types and has a rich set of libraries to make it an efficient programming language. It is a structured language, component-oriented, and scalable.

It is a free software environment and is majorly used among statisticians and data miners. The official R software environment is written in C, Fortran, and is available under the General Public License. It is an implementation of S Programming language combined with lexical scoping semantics, inspired by Scheme.
It is an interpreted language and can be accessed through a command-line interpreter. It is an open-source programming language and can be used without any license fee. It has an array of packages and attracts several industries.
It is highly compatible and can be run quite easily on Linux and Mac. It provides facilities for carrying machine learning operations like regressions and also features for developing artificial neural networks. It is highly extensible and a powerful package ecosystem. It lacks security features but is better than other programming languages.

It is a typed general-purpose programming language and supports object-oriented and functional programming features. The language is easier to learn and can be used for web development and application development. It is completely interoperable with Java and supports Java libraries.
It is the preferred language for Android apps and developers. Kotlin is a programming language for the Java Virtual Machine and can be used anywhere.
It is predominantly used for Android app development and writes less code. Kotlin features high readability and supports functional-programming features.
It is fully competitive with Java and has access to all Java frameworks while writing clear code. It suits for multi-platform development and provides Javascript support. This development provides more safety in comparison to Java and prevents errors during the program execution.

Go is a compiled programming language and has two major implementations. It was publicly announced in November 2009, and version 1.0 was released in March 2012. It is a typed programming language and has a similar syntax to C. It provides features such as high performance and efficiency, dynamic typing, and garbage collection.
Apps created in Go works faster and doesn’t require warm-up. It is a flexible language and solves a lot of problems. It automatically generates documentation from Go code. Go developers have several online courses and different tools to work with. For instance, Go Meta Liner is an excellent tool that helps developers to analyze code in detail.
Furthermore, it creates its LR parsers for better analysis. Go provides developers with API that can be used for testing and adding code samples. Go, known as Golang, provides outstanding support for multithreading and is being used by companies that depend on distributed systems.

It is a general-purpose language and provides support for object-oriented programming and functional programming. It has a static type system and provides language interoperability with Java.
Scala is object-oriented and has several features of functional programming languages like Standard ML and Haskell. It also has an advanced type system and supports algebraic data types and anonymous types.
It runs on the Java platform and is compatible with existing Java programs. It is easier to pick up than languages like Haskell. Scala Eclipse is based on Eclipse and provides more efficient support for Scala.
Furthermore, it can handle big projects with accuracy and efficiency in comparison to other languages. Its complex features promote better coding and enhance performance. It offers clean code and object-programming in an open-source package.
Several popular platforms like Netflix, Twitter, eBay, and others are using Scala for their platforms and products. The language was designed to resolve the errors that developers might face with another language.

It is a multi-paradigm programming language and allows matrix manipulations, implementation of algorithms, and creation of user interfaces. It allows you to implement and test your algorithms. It can be debugged easily and uses a large database of built-in-algorithms.
It is built around MATLAB language and involves using the Command Window as a mathematical shell containing MATLAB code. It is supported on different platforms and provides a measure of platform independence.
It is provided on Windows 2000/XP/Vista and different versions of UNIX. It comes with a library of predefined functions and provides prepackaged solutions to solve technical tasks. Furthermore, it contains a tool and allows a programmer to design a GUI for different programs. It has basic imaging commands and is an outstanding tool for technical information.

Patient Management Software Features and Benefits in Healthcare IT Industry