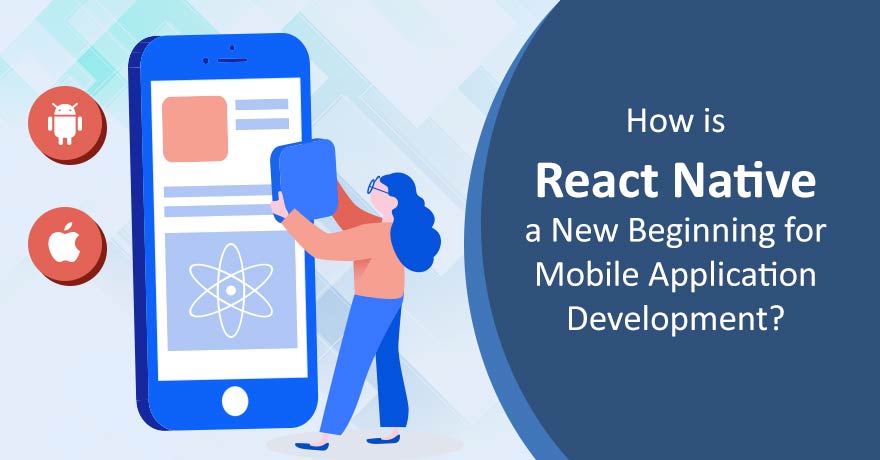 What do you understand by the term React Native? It is an open-source mobile application framework that is used to develop applications for iOS, Web, and Android. This framework is created by Facebook. It allows you to use the same designs as React and compose a rich mobile UI from declarative components. Anyone could use react native in their existing Android and iOS projects and could create an app from scratch.
Over the years, there is a huge growth seen in popular apps such as Uber, Facebook, Skype, and more. So, here the question arises - Should mobile developers use React Native for mobile app development or choose full native with Swift or Java?
When an owner plans to invest in a mobile app, the first question that comes in his/her mind is about the Operating System selection. When it comes to the mobile app, iOS and Android are the two most popular operating systems. While Android is better known for its faster deployment, iOS is popular for its better customer experiences.
But don’t you think there should be an application framework that features the combination of both OS? The hybrid app bridges the gap between development and user experiences. Several apps are capable of running natively across different platforms. With the technologies using the hybrid app development, React Native becomes prominent as it has advanced features.
React Native is now considered as the future of mobile app development. It uses the React.js library to create a native mobile app. And here are some benefits of React JS and the reasons why it is the best platform for large companies. Let us now delve deeper into the features of React Native.

React Native is open-source and has a strong community. It comprises a large community of contributors who solely work on making a project better. They work on fixing the errors and feature improvement.
Several advantages are there when you are using a community-driven environment. You have a huge team of native developers and enthusiastic JS who could share their expertise and make the best use of freely available components.

2. Cost Saving and the Use of Same Code to Build Different Platform App

With React Native, you use the same code on iOS and Android. This is how it saves time and cost to build different codes for different platforms. What could be better for developers when their effort would be half, and 90% of codes would be reused for both platforms?
You do not have to write code in Swift for Java and C# for Windows. That means it works on multiple platforms. Overall, it is Write Once and Use Everywhere Platform. However, it is recommended to calculate the extra time for code modifications if needed.

React Native covers two major platforms - Android and iOS. The development of native applications for different platforms is a tedious task. iOS application development requires a great understanding of objective C and Swift.
On the other hand, Android requires the knowledge of the Android SDK and Java. So if you want to stay up-to-date with the latest features, then the knowledge of React Native is required.

5. It is Greatly Responsive

React Native focuses on UI design. It is responsive, and its features are the best. Unlike MetroJs, this platform targets UI. React Native reduces load time and provides an extremely smoother feel for an app.
The apps built on React Native comprise a highly responsive interface. It gives a strong performance for mobile environments. It is superfast and compatible with mobile devices.

React Native builds on react ideas and creates strong mobile applications. It offers an additional feature of live reload that you won’t find in the native frameworks. It has a live reloaded feature that allows you to see the changes instantly after you have done modifications to the code.
For instance, you have opened two windows. One is showing your mobile screen and another that contains the code. You could see the effect of the changes done in another window.

Using Third-Party Plugins is a plus point. React Native is compatible with third-party plugins. This gives more features to the developers. But remember that the support for third party plugins is good and bad as well.
React Native links the plugins with native modules and allows features like zoom, rotate, and takes up less memory. This compatibility offers smooth experiences even if your device is running on the old OS.

Shorter development is another reason why React Native is an excellent choice for businesses. It offers a great development environment and reduces the tasks of rebuilding. It leverages the layout engines for different platforms and cuts the development time.
Several components are available so that developers could use them with this framework. Also, the developers need to know one layout engine to develop an app on iOS and Android.

9. Facilitates Responsiveness in the UI

It is cross-platform compatible but also offers native functionality. The use of Javascript in the native environment and facilitates responsiveness in the UI. This is why complex apps also run smoothly when the developer uses this powerful framework.

Initially, this framework was meant to work with the iOS platform. Later, it was updated to work with Android due to its demand. React Native features could be used for cross-platform app development.
Thus, it enables the developers to use a single code which works on Android and iOS. It also offers compatibility with tvOS, windows, and others, and thus makes it a foremost choice for businesses.

Although the usage of React Native is great for business, it has certain limitations.  Let us know the disadvantages of using React Native.

a. Lack of Connection

The biggest drawback of using React Native is its lack of connection with native elements like camera, recorder, etc. Several alternatives are available, but no one could compete with the features of Native app development.

b. Less Support of Native APIs

React Native is becoming popular, but it restricts the support of Native APIs. This limits the developers to use all the features of the Native APIs.
When it comes to cross-platform, React Native is the best framework that you could use. It offers several functionalities, to begin with. While it lacks some features, it is still the best framework option on every front.

How is React Native Better Than Other Frameworks?

React Native has surprised every tech freak and everyone in the mobile industry. It overcomes the limitations of hybrid apps and also fulfills the purpose of any development.
Today, it is the best open-source framework having the largest support community. It targets a mobile framework and creates a single Javascript codebase. It has easy access to plugins and offers a cost-effective solution.
Apps with this technology have a unique feel and appearance. It offers good performance and is better than other similar platforms. Also, here are a few PHP frameworks that you should keep an eye on in 2020.

Below described are a few factors you should look for while you are considering React Native Framework for developing an app.

When you are planning to build an app, money becomes an important factor. If your budget is low, then choosing the cross-platform framework is the right approach. They are budget-friendly, and also you have to hire a single developer to build apps for iOS and Android.

React Native is one of the best frameworks that is used for creating cross-platform mobile applications. It is open-source and reduces the time to write code. It has become a trend for using and building high-quality apps. Therefore, in the digital world, it is believed that Native React will be the future of mobile apps.
At Covetus, we have an array of Android and iOS experts. They possess excellent skills and experience in the React Native framework. Do you want to grow your business? If so, then connect with us today.