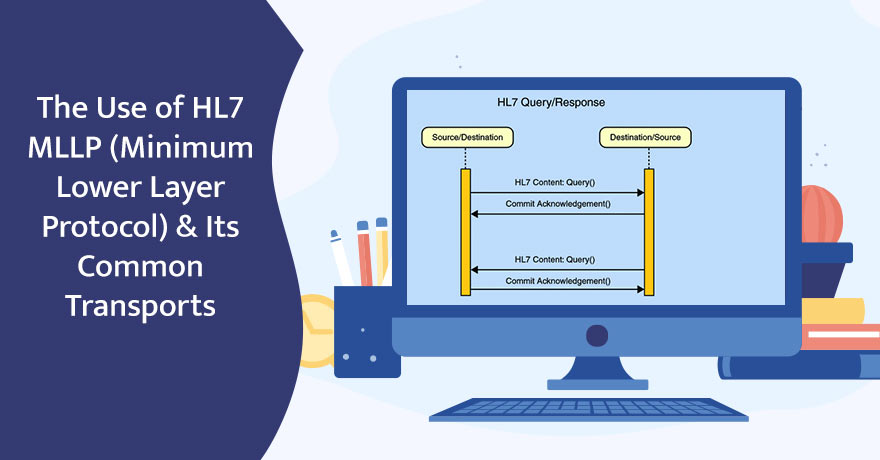 Have you ever heard about HL7 MLLP? MLLP (Minimum Lower Layer Protocol) is a protocol that is used for sharing HL7 messages and using Transfer Control Protocol (TCP) and Internet Protocol (IP). It transfers information in a stream of bytes and requires a wrapping protocol for communications code.
MLLP aims to provide an Open Systems Interconnection (OSI) session layer and reliable support protocol. Alternative names to HL7 MLP are V3 Minimal Lower Layer Protocol (MLLP), Release 2, Transport Spec MLLP, and Reaffirmation of the HL7 Version 3 Standard: Transport Specification - MLLP, Release 2.
Over the years, the Healthcare industry has changed a lot. It is using several digitization tools for helping healthcare professionals in enhancing patient care. Several healthcare tech trends like Artificial Intelligence and blockchain would set the trend in the coming years. Furthermore, the Internet of Medical Things (IoMT) is playing a crucial role in monitoring illness for patients and doctors.

It targets healthcare institutions, National Health Information Exchange Infrastructures, and Healthcare IT Vendors. MLP is all about how an application should wrap an HL7 message. It ensures that HL7 compliant applications know the starting of the message, where it ends, and where the next message will begin.
It places a header and a trailer around each message before conveying the message to TCP/IP. The wrapping characters envelop the HL7 message payload, which is then transferred to the receiving system. The system further decodes the message and then responds to the message.
In the MLLP based system, the system doesn’t send any message until the answer to the last message is received. MLLP Block is framed by the characters that have single-byte values. Multi-byte character encodings are not preferred as they generate errors. The use of single-byte value encoding such as UTF-8, ISO-8859-x, etc. is usually preferred.

Size of the Message That Can Be Shared

There is no defined size of the message. While some messages are concise, others are with a couple of segments. Several HL7 messages are long and have repeating observation segments that contain a doctor’s report. The headers and trailers that message contains are non-printable characters and are not in the content of HL7 messages.

The most common method used to send HL7 messages is called the LLP (Lower Layer Protocol). The less common transport is HLLP (Hybrid Lower Layer Protocol). Other messages that are sent via TCP/IP include SOAP, SMTP, and FTP as a common method.
The HLLP is a variation of LLP. It uses TCP/IP but incorporates error detection and with the use of checksums at the end of the message. They are used to check that no data is corrupted. They are created for each block of data and then sent for further application. The messages are then verified at the receiving end.
The most common checksum used in HLLP is Block Character Check, or commonly known as BCC, which is the sum of all characters in a block. Also, most vendors prefer choosing TCP/IP over LLP and HLLP. The common example of this includes handshaking that initiates communication.
The starting and ending of characters are used to stop the transmission of information. Other examples are full-duplex data transfer, a process in which a system bi-directionally receives data. Flow control is a process in which data is transferred between systems and is managed by TCP.
The LLP is also called as MLLP (Minimum Lower Layer Protocol) and is the most used standard for sharing HL7 messages. TCP/IP is a stream of bytes and is a wrapping protocol that is used for communicating codes. It is used for sending unencrypted HL7 via TCP over a LAN, such as in hospitals. Whenever the message is sent, it should be ensured that each segment is terminated by a carriage character.

HL7 Messages and Its Types

The HL7 (Health Level Seven) messages are used to transmit data between systems. It has a group of segments that are repeatable, optional, or mandatory. It also consists of a three-character code that helps in identifying message types. The events of the messages (end and beginning) are found in the MSH-9 field.
The most commonly used HL7 messages types are ADT, ORU, SIU, and general acknowledgment. HL7 messages contain a human-readable ASCII format. It also includes a carriage return character that separates each segment.
ADT is Admit Discharge Transfer. It carries patient demographic information and also provides other information related to patients events like its discharge date/time, registration number, contact, and other details.
ADT messages are common in HL7 processing and are widely used messages of all types. To transport an HL7 message via MLLP protocol, you have to add a vertical tab character at the start of the message. It is then separated through a file separator character and a carriage return at the end of the message.
With the advancing times, HL7 is addressing several challenges by exchanging information modeling standards.

HL7 standards are grouped into different categories. The primary standards category includes frequently used standards. The building blocks that are used to build the standards and technology infrastructure must manage falls into the category of foundational standards.
The profile that allows the constructs for the management of EHR (electronic health record) comes into the EHR section. For implementation, documents created are used in conjunction with the existing standards and fall into the implementation guides section.
Other healthcare standards are rules and references, clinical and administrative domains, and education and awareness.

The MLLP is framed by single-byte values. The characters are transmitted within the block. And they are encoded according to the character that doesn't conflict with the byte values used for framing.
Sometimes multibyte character encodings like UTF-32 may result in byte values that are equal to the MLLP framing characters and have byte values lower than 0*1F. This could result in errors.

Healthcare records are turning into digitization. Today, it has become essential that the data must be standardized and should support the clinical decision and machine-based processing.
At Covetus, we understand how the healthcare industry is changing and improving everyone’s lives. When it comes to a range of IT healthcare solutions, then we assure you to deliver customer-centric solutions while following medical standards. Moreover, we offer expertise in different medical standards like DICOM, CCD, IC-10, and more.
Our team has expertise in the process of transforming the information into standard formats like PDF, XML, and more.

Why do Healthcare Organizations Need to Prioritize Privilege to Protect Patient Data?