How is DICOM Important & Beneficial for the Healthcare Industry? 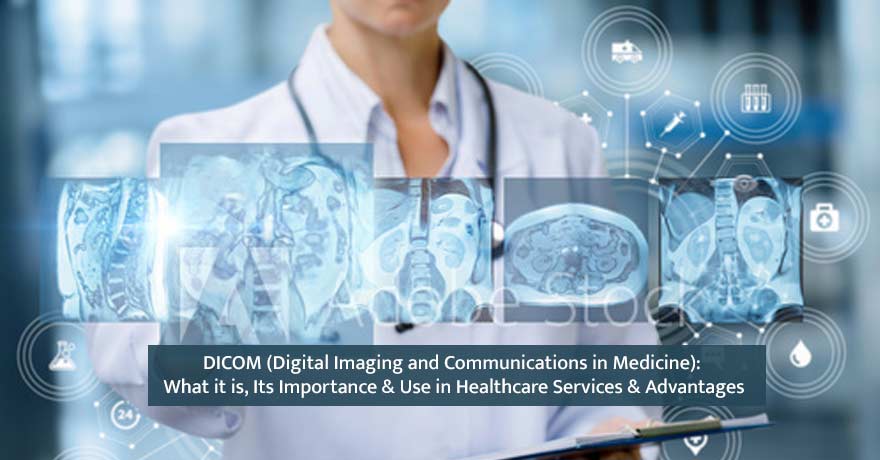 Over the years, the healthcare industry has evolved significantly and has contributed a lot to the world. Healthcare services are implementing digitization in each & every industry vertical.
Also, the outcomes of the digitization have helped healthcare service in several ways. The future of healthcare looks promising as patients and doctors are finding the digital services comfortable in exchanging information.
Similarly, DICOM, or Digital Imaging and Communications in Medicine, is a digital service that contains images, as you saved in the computer in jpg format. These images can be transmitted with anyone in digital formats.
Let us delve deeper and understand how it is benefitting the healthcare industry.

What Do You Understand by the Term DICOM?

DICOM is a worldwide standard and refers to Digital Imaging and Communications in Medicine. It is a standard protocol for the transmission of medical images and is used in several healthcare facilities. It defines how to store and transmit medical images.
Medical imaging devices like X-ray & ultrasound use this standard for the images. It was in 1985 when the first DICOM was developed. Over the years, it has evolved much and provided benefits to the healthcare industry. Initially, it was revised many times before it was widely accepted in 1993.
It stores data in different formats and keeps pixel data and data sets in the form of attributes. The best example of this is a CT Scan report, which contains pictures and data attributes to show the patient name and other information.
DICOM was developed by NEMA (National Electrical Manufacturers Association) and ACR (American College of Radiology). It is a trademark of NEMA that is governed by the DICOM standards Committee.

How DICOM is Used for Healthcare Services

Every field in the healthcare sector is now using DICOM. It is a standard that manages medical data and images. It aims to ensure the interoperability of systems and is used to store, display, process, print medical images, and related workflows.
Also, manufacturers who design imaging equipment like MRIs use DICOM standards. These standards are applied to the different fields in the medical industry and are majorly used in obstetrics, cardiology, and radiology.
Medical imaging is a process of developing a visual representation of the interior of the patient, which is usually hidden in the skin and surrounding other organ systems. Medical images are used for diagnosing and treating the patients as a part of a caring plan. The data collected is used for identifying physical abnormalities (if any) and provides a database of patients for later use.
Furthermore, today medical images and non-image related data are stored and secured digitally in the cloud. Here are other benefits of having HIS on the cloud. It offers incredible features to healthcare services. It easily collaborates and transfers the data between the users who use the same cloud network.

Importance of DICOM in Medical Imaging

Over the years, the introduction of imaging technologies like CT scan saw the requirement for a method that could transfer images and data between devices. Also, the need for a device that could produce varieties of digital image formats.
The ACR and NEMA collaborated in 1983 and formed a committee to develop standards to promote digital imaging information and facilitate the expansion of PACS. Today, DICOM is used to exchange medical images. It also enables the integration of medical imaging devices with different manufacturers.
Data and images are stored in a standardized format. Earlier, it was difficult to exchange data between imaging devices as they would need to transfer multiple image formats. Physicians are using DICOM to access images and reports. This allows them to diagnose and interpret information from anywhere.
Not all images use the DICOM format. XDS-I, an extension, is particularly used for images and allows the storage of different image formats. Several medical imaging systems offer features that use DICOM and non-DICOM formats.
DICOM services come under two categories, composite and normalized. The normalized services were designed and developed to provide information management functionality. It does not associate with the normalization of databases.
They were used with records to represent the single entity. On the other hand, composite services were developed for showing compatibility with the earlier versions of the ACR-NEMA standard. They were designed for storage, transfer, query, and retrieval.
These services were used with documents that contain information accessed from the real world entities like patient identification number and equipment. DICOM services support five areas. They are off-line storage media management, network print management, network image interpretation, and imaging procedure management.

Let us see what advantages DICOM offers to healthcare and other industries.

1. Collaboration With Existing IT Systems

The extension in which DICOM images are stored shows high performance and whenever images are viewed. The highest resolution captured by an image scanner has the most data.
Supplement 145 recommends an approach to store the large images in pathology and how to map sub-regions from the layer into the DICOM series.
The sub-regions are known as tiles and are stored in squares, which are further stored in 2-D arrays. Furthermore, single network transactions could transfer both patient and image details.

Most of the scanners do not capture the entire slide at the highest resolution. These are known as sparse images and could be managed by DICOM standard. It allows the image to not include uncaptured areas and makes a smaller image, which is beneficial for reducing the scanning time.

With DICOM, the patient and image specific information is properly saved using tags. Any system that reads the image could access and display the data. The header information also enables the image to get connected with the patient in the PACS.
During the migration time, when the images are moved to a different VNA, the DICOM header facilitates faster migration with minimum errors. It improves the patient’s safety while keeping the images and data together.

DICOM is providing several benefits to healthcare services, but it has certain limitations as well. Before you implement DICOM services in any healthcare organization, make sure that you know its limitations too.

Usually, scanners are optimized for speed. If scanners are not redesigned while adopting the DICOM standard, then an additional step should be done, which might extend scanning time.

It is found that if additional fields are added to the file but are not added correctly, then this could cause objects to create issues somewhere. Therefore, proper indexing is required when extra details are added to the database.

3. Implementing a DICOM Header Can be Difficult

The DICOM header contains several header tags. Out of which some are optional and mandatory to use. The scanner vendors might find this difficult to choose the tags in the DICOM header.
However, some pathologists find this as a major disadvantage because it contains the patient’s information and other details. Plus, the DICOM files are nearly 5% larger than the normal file-based on.tiff format.

The main aim of DICOM is to allow cross-vendor interoperability among devices that deal with digital medical images. Today, the majority of the imaging systems support and follow the DICOM standard, depending on the services they offer. DICOM has been accepted by private, public hospitals, and analysis laboratories.
If you are looking for healthcare digitization services, then we at Covetus could help you in accomplishing your goal. When it comes to healthcare IT solutions, we are a leading healthcare data integration and web development company and have specialization in analytics services.

How is the HL7 Arden Syntax Benefiting the Healthcare IT Sector?