What is Docker? A Comprehensive Guide for Novice Learners 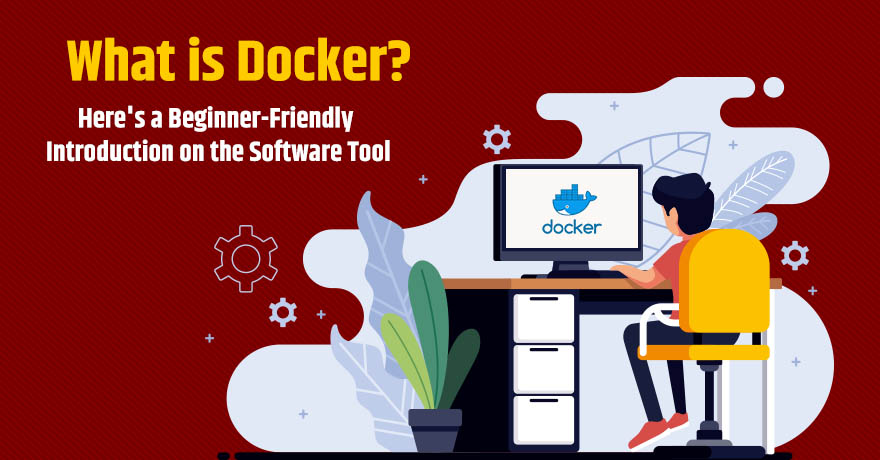 We are living in an era where every single organization demands to be empowered to seamlessly build, share, and run any application, anywhere. And, that’s what Docker does!
Yes, where all software companies aspire to empower their developers to deliver new customer experiences quickly, Docker enables them to achieve these goals.
The Platform Docker was initially released in the March of 2013, and since then, it gained huge popularity in modern world development, primarily in the face of agile-based projects.
So, to understand Docker, we will study its complete guide beginning from its basic introduction. Let’s start!

“An open-source project that automates the deployment of software applications inside containers by providing an additional layer of abstraction and automation of OS-level virtualization on Linux.”

Well, this is all typical technical language. So, let us learn in a bit simpler way. Yes! Docker is a container management service, with the keywords: developed, ship, and run anywhere. For developers, the whole concept of Docker is to develop applications easily, then ship them into containers which can be further deployed anywhere.
In other words, it is a platform which packages an application and all its dependencies collectively in the form of containers. And, Docker’s aspect of containerization ensures that the application can work in any environment.
If we define containerization, it is the use of Linux containers to deploy applications. Well, Containers is not a new concept, but its use for easily deploying applications is widely known.
There are several reasons why Containerization is increasingly popular. They are:

It is possible to containerize even the most complex applications.

One can easily deploy updates and upgrades on-the-fly.

It is possible to build locally, deploy to the cloud, and run anywhere.

One can increase and distribute container replicas.

It is possible and easy to stack services vertically as well as on-the-fly.
As shown in the below diagram, each application runs on separate containers and has its set of libraries and dependencies. It gives developers surety that they can build applications that will not interfere with one another and ensures that each application is independent of other applications.
Consequently, a developer can develop a container having different applications installed on it and give it to the QA team. Next, to replicate the developer’s environment, the QA team would only need to run the container.
It could be said that Docker is a bit like a virtual machine (VM). But with the only difference that Docker allows applications to use the same Linux kernel as the system that they're running on and only requires applications to be shipped with things not already running on the host computer, rather than creating a whole virtual operating system. It reduces the size of the application plus gives a significant performance boost.
Moreover, Docker is open-source. It implies that one can easily contribute to Docker, and if they need additional features that aren't available out of the box, it can extend it to meet their own needs.

Who is Docker for?

The tool Docker is not only designed to benefit developers but also system administrators by making it a part of many DevOps (developers + operations) toolchains. For developers, working on Docker means that they can focus on writing code without even bothering about the system on which it will ultimately be running.
Plus, by using one of the thousands of programs already designed to run in a Docker container as a part of their application, it allows them to get a head start. For operations staff, working on Docker means flexibility and potentially reducing the number of systems required because of its lower overhead and small footprint.

The reasons why Docker is so useful are:

Use of Docker enables developers to work in standardized environments and also streamlines the development lifecycle by using local containers. Moreover, its Containers works great when it comes to continuous integration and continuous delivery (CI/CD) workflows.

Its container-based platform can manage highly portable workloads. Plus, it can run on different platforms such as physical or virtual machines in a data center, cloud providers, a developer’s local laptop, or also in a mixture of environments.
Additionally, due to its portability, Docker can manage workloads dynamically. Also, it scales up or tears down applications and services in near real-time.

Docker contributes a viable, cost-effective alternative to hypervisor-based virtual machines; hence, we can achieve business goals efficiently.
Also, it is a perfect choice for both high-density environments, and small and medium deployments, particularly when we want to make more with fewer resources.

We use several types of Docker Objects, like images, containers, networks, volumes, plugins, and others.
i. Docker Images
In terms of the layman, Docker Image can be compared to a template that is further used to create Docker Containers. And such read-only templates are the building blocks of a Docker Container. Moreover, the docker run can be used to create a container and run the image.
Docker Images are stored in the Docker Registry. It can be either a user’s local repository or a public repository like a Docker Hub, which allows multiple users to collaborate in building an application.
ii. Docker Containers
To define Docker Containers, they are some standardized unit, which can be created on the fly to deploy a particular application or environment. It could be a CentOS container, Ubuntu container, etc., to fulfill the demand from an operating system point of view. Also, like CakePHP container or a Tomcat-Ubuntu container, it could be an application-oriented container.
Docker Container holds the entire package needed to run the application. Hence, we can say it is a running instance of a Docker Image. Therefore, created from the Docker Images, these are the ready applications which are the ultimate utility of Docker.

A text document that contains all the commands that a user can call on the command line to assemble an image is known as a Dockerfile.
So, by reading the instructions from a Dockerfile, Docker can build images automatically. To create an automated build to execute several command-line instructions in succession, one can use Docker build.

The place where the Docker Images are stored in is what we call Docker Registry. It can be either a user’s local repository or a public repository similar to the Docker Hub enabling various users to collaborate in developing an application.
Also, one can exchange or share containers by uploading them to the Docker Hub, with multiple teams within the same organization. Docker Hub is simply Docker’s very own cloud repository same like GitHub.

It could be said that Docker Compose is a YAML file that holds details about the networks, services, and volumes for setting up the Docker application. So, to create separate containers, you can use Docker Compose, and host them and get them to communicate with each other. Moreover, for communicating with other containers, each container will expose a port.

To create and maintain a cluster of Docker Engines, Docker Swarm is a technique. Furthermore, the Docker engines can be hosted on different nodes, and these nodes (present in remote locations) form a Cluster when connected in Swarm mode.

To manage the building, running, and distributing of Docker containers, there is a background service running on the host. Moreover, the daemon is the process which runs in the operating system to which clients talk.

A command-line tool which enables the user to interact with the daemon is known as Docker Client. Besides, many other forms of clients are there, such as Kitematic that offers a GUI to the users.

As we already mentioned earlier, the registry of Docker images is what we call Docker Hub. The registry could also be considered as a directory of all available Docker images. You can easily host your Docker registries and can use them for pulling images if needed.

What is Docker Engine?

In simple words, the Docker Engine is the heart of the Docker system. Yes, Docker Engine is just the application of docker which is installed on your host machine. Moreover, it works like a client-server application which uses:
i. A server which is a sort of long-running program known as a daemon process.
ii. A CLI:  command-line interface client.
iii. A REST API which is used for communication between the Docker Daemon as well as a CLI client.

Well, maybe containers by themselves are not an alternative to taking proper security measures, but Docker surely brings security to applications running in a shared environment.
Moreover, its Security Management enables us to save secrets into the swarm and further choose to give services access to certain secrets.

There are several features of Docker which helps it gaining such huge popularity. Few of them are:

Docker helps us to configure the system easily as well as faster. That means one can deploy their code in less effort plus time by using Docker. Moreover, Docker does not ask the requirements of the infrastructure with the environment of the application.

As working with Docker offers a smaller footprint of the operating system via containers, it helps to reduce the size of the development.

How Can Docker be Useful to Your Business?

By decreasing the infrastructure and maintenance costs of your existing application portfolio, the Docker Enterprise container platform can help your business gaining immediate value plus accelerates your time to market for new solutions.

As we very well know, the new services and new applications are what maintain your competitive edge. That is what Docker does to organizations. Yes, it triples the organization's speed to deliver new services with development and operational agility enabled by containerization.

Want to empower your developers to be productive on day one? Then Docker is the solution; it removes the friction of “dependency hell” to make getting started and shipping new code faster as well as easier.

By increasing your application workload density, Docker optimizes your costs, and also helps in getting better utilization of your server to compute density and reduce software licensing costs.

By accelerating your mean time to resolution for issues, Docker ensures customer satisfaction and service levels. Plus, it deploys fixes to your applications.

So, here we have seen the basics of Docker platform to understand what it is. It’s a brief introduction showing how it gained immense popularity in this fast-growing IT world.
And, more and more organizations are continuously adopting Docker in their production environment. And, no wonder docker scaling up the application is a matter of spinning up new executables, without running heavy VM hosts.
We hope this was helpful!

How to Cite a Website With MLA 8 Referencing? Learn Here!