15 Good Reasons Why You Should Learn Python Programming Language 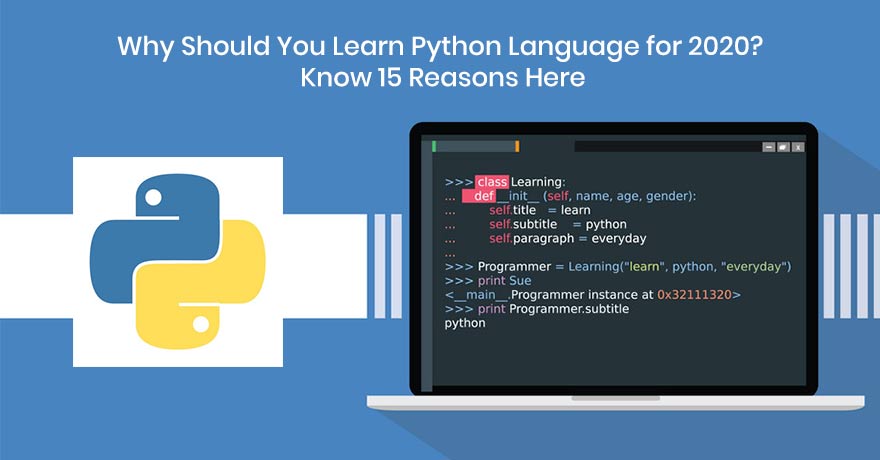 Python is one of the most popular and fastest-growing programming languages nowadays. A recent survey by Stack Overflow showed that Python has taken over languages such as Java, C++, and C and has made its way to the top. It’s also a common language used in web development and software engineering.

Because of python’s flexibility, versatility, and object-oriented features,  it is one of the most loved programming languages by developers, software engineers, data scientists, and even hackers. It could be said that because of Python’s abundant libraries, vast collections of modules, various frameworks, and file extensions, we enjoy many of the web and mobile applications today. Apart from that, Python is best for building micro-project to macro enterprise web services as well as supporting other types of programming languages.

Also, being an easy to learn, high-level language that has a clean syntax, Python can do complex tasks as well. Hence, it’s recommendable for both novices as well as an experienced programmer to learn Python in 2019-20 for sure.

Well, many more reasons state why one should learn Python. Let’s learn all one by one. But before that, let’s have a brief knowledge about Python to understand it well.

What is Python Programming?

First developed way back in 1991, Python, a general-purpose programming language, for the uninitiated. Around the notion that code should be as readable as possible, it was created so that it’s easily understood to all. It is, in fact, still relied upon nearly three decades later and is of particular importance in machine learning applications today.

And, as it is simple and easy to grasp, it allows almost anyone to learn Python programming. Yes, due to its highly readable syntax, one doesn’t have to be a computer whiz or possess any prior technical expertise, especially to dive right into it and succeed. In fact, before moving onto other more advanced languages, many first-time coders learn Python.  There’s no better way to start if you want to start down the path to becoming a professional coder.

Another benefit offers that it is completely free to download, use, and code. Yes, its commands are mostly in plain, clear English. That makes it easy to write and remember commands. A developer can learn many things just by looking at the code, plus the code is readable and with a little knowledge.

Besides all, Python has some standard libraries that allow a lot of functionalities, which lets you implement complex applications with ease. Beyond that, Python was designed with the freshers in mind. The use of common expressions and white space has eliminated the need for tedious variable declarations and ugly braces.

There are times when we want to learn something but don’t know the exact reason why. Similarly, if you are also thinking of learning Python but not so sure why you should do that, then here we are with several reasons that emphasize the benefits of learning Python in 2019-20.

Well, if we ask the same question for freshers or beginners, learning Python makes sense because it’s simple, and the main reason for learning Python is the rise of the language.

And, if we talk about the same thing in the reference of experienced programmers who are looking to go into Machine learning and Data Science, then learning Python makes sense because it’s quickly becoming the most used programming language, and there are powerful APIs and libraries available for AI, Machine learning, and  Data Science.

However, without any further ado, let’s discuss the top reasons to learn Python in 2019-20:

1. Makes it Easy to Work in Data Science

It could be said that it is one single, major reason why various programmers are learning Python. According to stats, many experienced coders who are bored with their Java programming jobs in Investment banks are learning Python on several online platforms to make a career in Data Science due to exciting work as well as the high pay.

But, then the question arises that what makes Python a preferred language for Machine Learning and Data Science? If we talk about a few days ago, it was R that was considered best for that. Well, the answer is the framework and libraries that Python offers, like Pandas,  NumPy, PyBrain, and PyMySQL on AI, Machine learning, and  DataScience is one reason.

Another reason could be the diversity. Yes, it allows you to do a lot more than R like you can go into web development, create scripts to automate stuff, and so much more.

As we have already mentioned, Python is one of the easiest languages to learn. Even Stack Exchange, a Q&A answer site responses to questions about Python on Software Engineering, indicates that it’s one of the first languages novice developers should go for because it’s simple to read. It removes a lot of syntax-learning stress from coding beginners as it reads similarly to English. In addition to that, Python handles the complexity for you.

Apart from being easy, it’s simplest to use. Yes, and this is one of the other reasons why beginners should choose to learn Python. It can’t be denied that you don’t want to start with a programming language that has tough syntax and weird rules, especially when you first start with programming and coding.

So, Python is the right choice for you because it is both simple and readable. Not only for learning, but the language is also easier to set up; one does not need to deal with any classpath problems such as Java or compiler issues such as C++.

All you need to do is install Python, and guess what, you are done. Furthermore,  it will also ask you to add Python in PATH while installing, and that means you can run Python from anywhere on your machine.

Want to know what contributes to its simplicity? Well, its features like below do:

Also, there is no complex syntax in Python. For example:

You have to write the above three lines in Java if you have to print ‘hello world’ whereas just one line is sufficient to print “hello world”  in Python. Isn’t it simple?

As we all know that in the last couple of years, the growth of machine learning is phenomenal, and it’s rapidly changing everything around us. Well, this is one key reason why programmers are learning Python.

Besides that, the algorithm is becoming sophisticated day by day, and one great example of this is Google’s Search Algorithms, which can now answer what you are expecting. It can be seen that there are several Chatbots around, totally driven by Algorithms, to answer your queries.

So, it signifies that Python is the only major programming language that makes everything easy, whether you are interested in machine learning, wants to play around, or want to do a pet project.

As the developer community is preferring Python over anything else on Data Science and Machine learning, you will find more content around Python even though there are machine learning libraries available in Java.

There are a few factors by which The TIOBE index determines the popularity of various programming languages such as which third-party vendors make use of the language,  the number of skilled engineers in those languages, and what are the offered courses.

Another reason for learning Python is good old development. It offers so many good frameworks and libraries like Flask and Django, which makes web development easy.

The task can be completed in minutes on Python, which takes hours in PHP. Moreover, Python is nowadays a lot used for web scraping. Yes, and also some of the famous websites on the Internet, such as Reddit, are built using Python.

When it comes to learning a programming language, friends are your biggest asset; hence, you need a community to learn new technology because you might need a helping hand when you get stuck with one or another issue.

Well, you can find the solution to your Python-related problem in minutes, and for that, thanks to Google. Several communities, such as StackOverflow, bring many Python experts together to help newcomers.

There are a sheer number of open source libraries, modules, and frameworks available to do whatever you want to do in Python, and this is one similarity between Java and Python. And, these large numbers of libraries and frameworks make application development easy.

Just think to create a web application without Spring in Django or Java and Flask in Python. As you only need to focus on business logic, it makes your job simple.

For different needs, Python has numerous libraries. For example, for web development, Flask and Django are two of the most popular, and for Data Science, SciPy and NumPy are there.

Apart from that, Python has one of the best collections of data science and machine learning libraries like Keras,  Scikit-Learn, Pandas, TensorFlow, and many more.

Many people are not aware that besides being a programming language, Python can also be used as a Scripting language. Yes, you read it right. In scripting:

i. The code is written in the form of scripts and then gets executed
ii. The machine reads and interprets the code
Iii. Error checking is done during Runtime

It can be used several times once the code is checked. So, you can automate certain tasks in a program by automation.

It could be one of the best reasons you should learn Python. That means it’s not tied to just one thing like some other programming languages, like  R is only good for Data Science and Machine learning but not much when it comes to web development. So, you can do many things if you choose to learn Python.

For example, you can do Data Analysis using NumPy, Scikit-Learn, Scipy, and NLTK and can create your web applications using Flask and Django. Apart from that, you can also use Python to automate many of your day-to-day tasks and write scripts.

Some of the incredible work you can do with Python:

If you are starting your programming career, then it makes a lot of sense to learn the major programming language Python that is growing fast.

Along with helping you in getting a job quickly,  it will  also accelerate your career growth. So, we believe this should be the most important reason to learn Python for beginners.

As we have discussed the rising career scope and high demand for Python developers, they are one of the highest-paid developers, especially in Machine learning, Data Science, and web development.

If we talk about the average salary they are getting, it ranges from 70,000 USD to 150,000 USD based on their location, experience, and domain.

There are various powerful applications integrated with other programming languages in Python. Some of them are:

For building IoT, or the Internet of Things, solutions, Python is one of the top four languages today. IoT is all about connecting things – such as coffee makers, lamps, washing machines, etc. – to one another via the Internet. Besides that, most things that have ‘on’ and ‘off’ switches can be part of IoT.

The extensible and portable properties of Python enables us to perform cross-language operations seamlessly. Ranging from Windows to Macintosh to Linux, Playstation, Solaris,  among others, Python is supported by most platforms present in the industry today.

Moreover, the extensibility feature of Python allows you to integrate .NET as well as Java components. It is also possible to invoke C and C++ libraries.

So, here we’ve listed some reasons to learn Python in 2019-20, ranging from its excellent salaries to the versatility of this language.

Good luck with your Python journey, and believe us learning the language  is certainly a great decision and will pay off in your near future.