What is PHSA (Public Health Service Act) and Its Amendments? 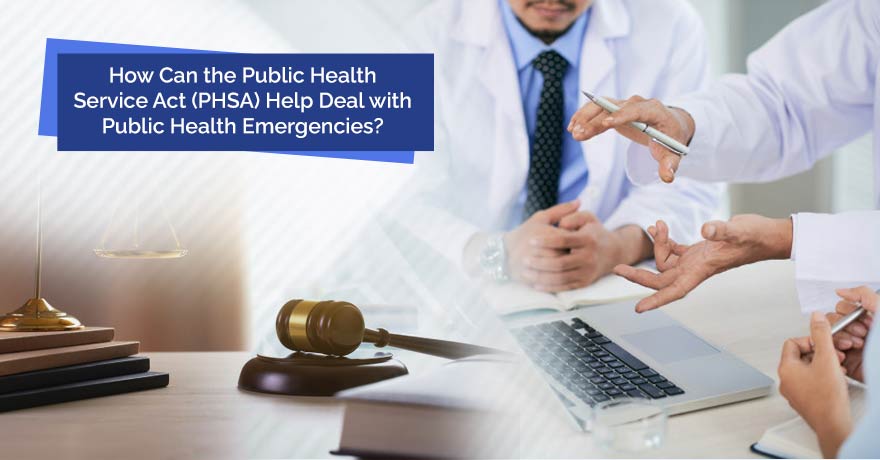 The Public Health Service Act, or PHSA, provides legal authority for the department of HHS (Health and Human Services) to respond to public health emergencies. It is a United States Federal law passed in 1944 and is captured under Title 42 of the United States Code, Chapter 6A.
Besides other things, it authorizes the HHS secretary to lead all public health and medical response to health emergencies. This act was amended by the Pandemic and All-Hazards Preparedness Act of 2006 (PAHPA) by the Pandemic and All-Hazards Preparedness Reauthorization Act (PAHPRA) of 2013, by the 21st Century Cures Act of 2016.
The PHSA granted the authority for the consultants to be appointed and scientists, "without regard to the civil-service laws," known as a Title 42 appointment.

The Act has been amended several times. Some of these amendments are the Family Planning Services and Population Research Act of 1970, Pub L. 91-572. It established Title X of the PHSA, which was dedicated to providing family planning services for people in need. Then, it was the National Cancer Act of 1971, which was intended to amend the PHSA to strengthen the National Cancer Institute. It was signed by President Nixon in1971.
The next is the Health Insurance Portability and Accountability Act of 1996. It was enacted by the 104th United States Congress and was signed by Bill Clinton in 1996. It was established to modernize the flow of healthcare data that is maintained by healthcare insurance industries. The data should be protected from theft and limitations to healthcare insurance coverage. This act consists of five titles.
Title I protects health insurance coverage for workers and their families. Title II is known as the Administrative Simplification Provisions and required the establishment of national standards for electronic health care transactions and employers. Besides, Title III sets the guidelines for pre-tax medical spending accounts. Title IV sets guidelines for group health plans. The last Title V focuses on company-owned insurance policies.
The Health Center Consolidation Act of 1996 is commonly known as Section 330. This Act brings together different funding mechanisms for the country’s community health facilities like health centers, and more.
Muscular Dystrophy Community Assistance Research and Education Amendments of 2001. It amended the PHSA to provide for research regarding dystrophy, including congenital, distal, myotonic, limb-girdle, and more. The act established a Federal Advisory Committee, which consists of up to 15 members to coordinate the activities with Federal health programs.
The Hematological Cancer Research Investment and Education Act of 2001 revised the Public Health Service Act to allocate funding and establish research and education programs, in particular lymphoma and leukemia. It was introduced by Senator Kay Bailey Hutchison in June 2001. The bill came out through the Senate Committee of Labor, Education, and Pensions passed the United States Senate by unanimous consent in 2001.
The Newborn Screening Saves Lives Act of 2007 was signed by George W. Bush in 2008. This act amended the PHSA to establish programs concerning newborn screening education and outreach. Furthermore, it established programs to coordinate follow-up care.
The Patient Protection and Affordable Care Act of 2010 or the Affordable Care Act’s major provision came into force in 2014. The law enacted a host of system reforms intended to constrain healthcare costs and to enhance quality. Before and after enactment, this act faced several legal challenges.
The Pandemic and All-Hazards Preparedness Reauthorization Act of 2013 was enacted by the 113th United States Congress. It amends the PHSA to extend and to improve several programs to prepare the health professionals in the event of a pandemic, nuclear attacks, and chemical attack. It focused on improving preparedness for public health emergencies.

The Social Security Act authorizes the Children’s Health Insurance Program (CHIP) and other programs of the department. It authorizes the secretary to temporarily modify or waive Medicare and HIPAA requirements when the Secretary has declared a health emergency, and The President has declared a major disaster under the Stafford Act or a national emergency under the National Emergencies Act.

What the Law Does and How Does it Work?

How the Law Affects States?

There is no regulatory requirement that a state should submit a request to the secretary for the determination of the public health emergency under SSA Section 1135. A state has declared an emergency and requested federal assistance in response to an emergency.

PHSA Act forms the foundation of HHS authority for responding to public health emergencies. It also authorizes the HHS secretary to lead public health and medical response and incidents covered by the Response framework.