Top 8 Mistakes You Need to Avoid in Mobile Application Development 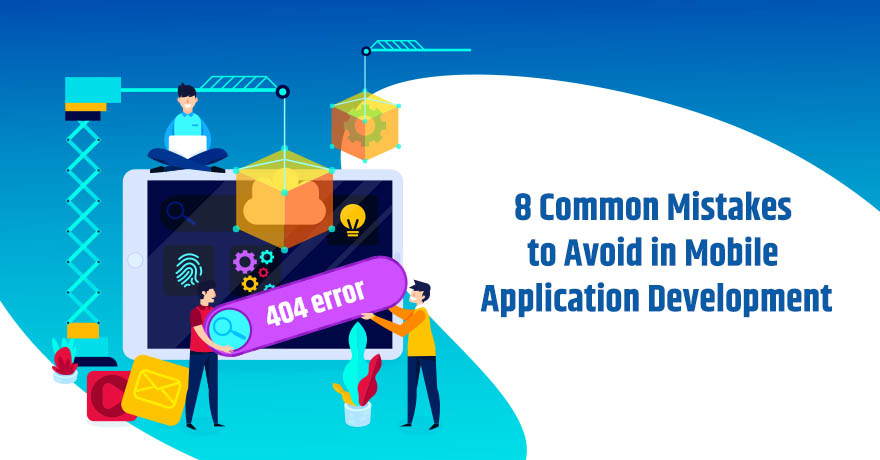 No matter how cool the team, sustainable budget, or promising market you have, mistakes like ignoring data on your target audience, poor usability, and redundant functions will most likely lead your app to failure. Several examples out there showcase when and why due to some mistakes, everything ended up badly, even if the launch environment was perfectly favorable.
But how to find which of the steps could go wrong. So, we chatted with our team, working on multiple projects, to find out many of the wrong decisions taken by customers in the past, which led them to a huge failure. As we all know, it is always better to learn from the mistakes of others than making them ourselves.
So, let’s discuss the most common mistakes that may occur in the mobile app development area, which one has to try to avoid to implement a project successfully.

1. Check if the App is Meeting User Expectations

It is not at all an easy task to attract new visitors to your app each day. Yes, every single user has a different set of expectations.
So, it is a must that you take the utmost care of the first interaction of an app with the visitor as it is the most important stage. After all, we all know the famous saying, “the first impression is the last impression.”
Many users go for a kill to figure out things on their own, while others expect a welcome message followed by an app manual.
Well, there is no doubt that it is an almost impossible task to reach the preferences of every single user, and due to that, most of us miss early visitors only due to poor homepage screens.
Moreover, users should not be asked to fill long registration forms, even without letting them know how the app will be beneficial to them. In all, having long registration forms at the beginning with splash screens, along with animated elements which may block the relevant content, is an extremely bad idea.
So, instead of asking for just name and email address, get a routine sign in/sign up procedure in place. Additionally, you can also try to integrate social media login; it allows users to login indirectly through their social media profiles, which is an easy and most preferable process nowadays.

2. Launching Apps on Multiple Platforms at a Go

No wonder, it is difficult to determine which would be the ideal platform for launching your app as there are millions of apps on both Google Play and Apple Store. So, focusing on one platform at a time could be the best one to use as it will help reduce the making cost and can also provide MVP (Minimum Viable Product) out in the market soon.
Furthermore, you will need to focus on designing and adding functionalities for both places if you are planning to launch your app on both platforms. It will be only increasing your development time and cost.
For instance, Instagram, a popular social networking service, had almost 30 million users on the iOS platform, even before launching the app on the Android platform.

3. Are You Adding Too Many Features?

In fact, for many app developers and businesses, the epithet “feature-rich” has become a positive quality, and they use it more often than not. Well, must say, this is one of the most common mistakes that app developers make.
Not only we are saying this, but even if we go by the user feedback, it suggests that having too many features in an app makes it cumbersome and bulky in size and fails to add much value to the overall user experience.
Opposite to that, having targeted and fewer features makes a mobile app purposeful and easy to understand.
Plus, adding more and more features not only makes the app slower but also adds the extra load time. And what about the additional time, efforts, and resources that go waste into making those extra features.
In all, try to have the main feature along with the other supporting features and make the purpose of the app complete.
For example, in the case of a basic messaging app, the essential features would be,
i. Contact integration
ii. Profile customization
iii. Instant messaging feature
iv. Video and voice call
v. Media file transmission
vi. Push notifications
Well, all such features will perfectly help the user in tackling any problems that they face while chatting.

As there are 2.1 million Android apps and 1.8 million iOS apps already, then it is vital to think out of the box while making an app.
For example, you already have some idea about your app that what it should do, and you may consider it something entirely new or possibly in demand in the market. But if such considerations of yours are not supported by appropriate analysis, it will surely turn out to be just an unverified opinion.
And, most importantly, this issue will not fix itself throughout the development process. Also, you risk creating a product that nobody needs or which already has preferred counterparts. But, you will still have to pay designers and developers for their work through the entire project. This all will lead to a huge loss.
So, all you need is a complete research about your idea before making the app.

6. Not Paying Much Attention to UX

As we discussed above as well, every mobile user has a different expectation than web users. For instance, Apple has always been strict about user experience along with top-notch design.
In all, the app must be so sharp and intuitive that even a kid can use it without experiencing any difficulties. And, keep in mind that mobile users are much pickier in comparison to web users because once they receive bad experience from any app, they never get back to them.
No doubt that to find beta testers on the online work platform is always a smart idea. So ask as many people as you can to test your app’s UX because not only the design but even the user-experience should be perfect before launching your app.
To understand well, you can take the example of one of the most popular online movie and TV show streaming apps in the world, i.e., Netflix, which makes constant effort to enhance its UX.
And, the feature of “Continue Watching” is one of the best UX examples which enables you to start exactly from where you left last time.

7. Is Your App Having Visual Clues To Help Users?

We all know this famous saying, “a picture speaks a thousand words.” In comparison to a plain text, an image always helps in better understanding. Thus, it is even more noteworthy to incorporate visual clues within your app. Still, we cannot say that visual clues cannot go wrong or are always perfect.
That is because somehow, visual clues also have this tendency to look poor or not as per individual user perceptions. It implies that the designer has to be even more careful in providing generic appearance in such a scenario so that it meets everyone's expectations.
Therefore, let’s have a look at a few design principles that can help tackle this issue:
a. Try using the conventional forms of design instead of ones that look impressive and unique. The reason is obvious.
b. Many people out there do not like a mobile app witnessing significant changes. A survey finds that people are happier to use the traditional form only.
c. Cultures and regions influence metaphors. So, using them while making an app can surely help users emotionally connect with the app quite easily. However, make sure not all metaphors are understood right away. Hence, for shortlisting metaphors that can be easily grasped by anyone, extensive research is needed.
d. For better visual clues, you can add text in them because maximum people can understand the text in a much better way than graphics.
Besides all, instead of placing an icon, describing an action works like wonder for most to interpret things with a great amount of ease.
Well, use both in parallel complementing each other to make users happier.

8. Are You Releasing the Updates on Time?

There is no specific time when your app would be final. Yes, and even developers should never consider it final.
Always consider your application as a work in progress. Also, make sure that you are assessing the app’s performance and making essential changes to it.
Don’t forget that it’s important to release updates on time to obtain an application that is free of all the errors.
And the best part is, it is not difficult to achieve it; all you need is to hire the right Android app developer who ensures to revamp and make necessary changes to the app to improve its performance.

So, on the way to mobile app success, all such mobile app development mistakes can be a significant hindrance. Therefore, while pursuing your standard app development process, make sure you avoid the mistakes stated above. It would not only help you modify your app as per the requirement of the customers but will also give you a clear idea about your market for further references.
App development is all about getting ample return on investment and engaging customers in a way that helps you grow your business. So pay attention to aspects like customer validation, requirement analysis, app testing, app launch, etc.
Also, try to conduct an in-depth customer survey to gain positive feedback as it will help your app to reach newer heights of success in no time.

10 Mobile App Features That Can Make Your App Win Customers