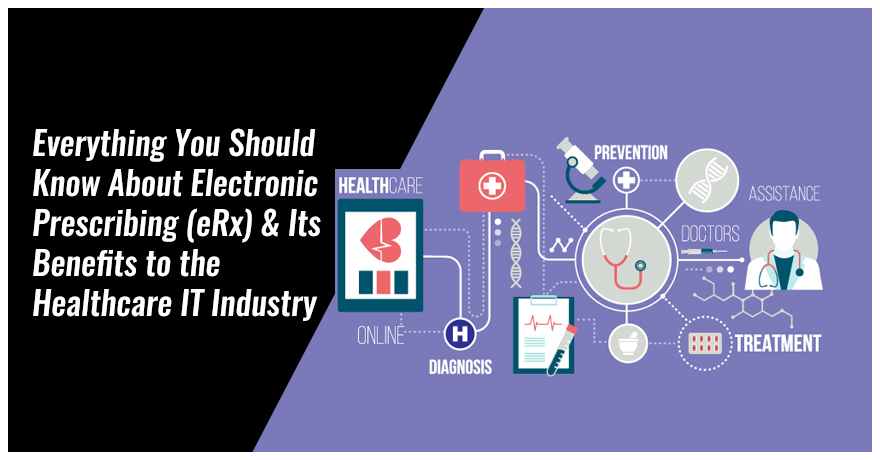 Have you ever heard about Electronic Prescribing or e-prescribing or e-RX? It is a computer-based transmission, electronic generation, and takes the place of paper and faxed prescriptions. It allows a pharmacist, physicians, and other healthcare professionals to use digital prescription software and transmit a new prescription to a new community.
It is meant to reduce the risk associated with scriptwriting. To qualify for Medicare’s eRx Incentive Program: the prescribing systems offer Stage 2MU electronic prescription reporting. It provides connectivity to pharmacies with complete drug interaction and formularies.

CMS states e-Prescribing as a healthcare provider that sends error-free and understandable prescriptions directly to the pharmacy from the point-of-care. It is a technology framework that allows healthcare experts to send prescriptions to a pharmacy, instead of using faxed notes.

eRx platforms such as Surescripts began building electronic connections in 1999. In 2003, eRx took off with the Medicare Modernization art. Electronic Prescribing became legal in 2007.
In 2008, it became easier for the healthcare industry to adopt critical information exchange capabilities via a single channel. The same year, the DEA proposed a rule that allowed the EPCS (Electronic Prescribing of Controlled Substances), and it is a crucial milestone to enhance patients care and reduce fraud.
With the advent of the American Recovery and Reinvestment Act and Creation of the Meaningful Use Program in 2009, the healthcare industry had introduced the incentives and penalties to boost collective progress.
In 2010, the Surescripts achieved a milestone and processed over 300 million electronic prescriptions. In 2014, the industry got the opportunity to extend electronic prescribing into different markets.
In 2015, the electronic prior authorization service reached over 30,000 doctors nationwide. These achievements won’t be possible without the early days of prescribing.

Points to Note About ePrescribing

In today’s scenario, hospitals, physicians, doctors, and other healthcare experts are increasingly using ePrescribing. Here are some basic things that should be noted about ePrescribing.
1. ePrescribing is a process of using different electronic devices to write, review, send, modify, and communicate drug prescriptions. It can occur at different levels of complexities. The final one would be the integration with an EHR.
2. By 2020, the e-prescribing market is expected to cross $900 million. It is expected that the market would grow with an annual rate of 24%.
3. By 2014, over 40% of physicians were e-prescribing with an EHR.
4. Minnesota enacted legislation in 2008, and pharmacies began e-prescribing by January 2011.
5. In 2013, 97% of chain pharmacies were prescribing in Minnesota, and nearly 90% of non-chain pharmacies were doing the same.
6. New York’s prescribing mandates include repercussions for non-compliance, which could be criminal penalties.
7. E-prescription varies depending on practice size. The majority of physicians e-prescribing practiced in groups, according to the January 2015 data.
8. In 2009, CMS launched an eRX Incentive Program. The program encouraged eligible providers to use e-prescribing.
9. In New York, nearly 25% of providers can electronically prescribe controlled substances.
10. In 2015, Vermont became the last one to allow electronic prescribing of controlled substances.
11. A study published in a journal examined the accuracy of prescribing in different settings.
12. For patient’s safety, e-prescribing can adverse drug events related to medical prescriptions and filling. According to studies, the error rates decreased from 40 per prescription to 6 per prescription.
13. e-prescribing takes less than 20 seconds per patient, and the overall time is saved.
14. Implementing new technologies requires investment and training. The physicians reported a lack of support to adopt prescribing.
15. The system experiences hardware and software problems. It involves the transmission of data that presents privacy concerns.
16. Surescripts is an information network partnered with over 700 EHR applications, used by nearly 1000 hospitals, and having over 90,000 healthcare providers. It has collaborated with top health IT vendors like NextGen and more.

E-prescribing reduces writing errors and provides access to physicians to view a patient’s prescription history. According to reports, over 90,000 prescription drug errors have occurred since 2000. The errors found were mainly due to handwritten prescriptions.
For instance, Brintellex is used to treat depression, whereas Brillianta treats acute coronary syndrome.

Physicians can instantly view the patient’s medication history and won’t have to memorize the drugs. Different tools, like Rcopia & iPrescribe, save two years of data from the collection and reduce physicians’ efforts.

3. Shares Instant Notification of Drug Interactions and Allergies (if Any)

With e-prescribing, physicians have full access to a patient’s data. The documents involve drugs given, allergies, or positive and negative reactions shown by patients.
Alerts in the system notify the prescriber about allergies or other issues and prevent the patient from taking the wrong drug.

Physicians can track how many controlled substance prescriptions a patient has received. It becomes easier for physicians to track the data across multiple pharmacies.

Earlier, physicians and other clinical staff had the responsibility to respond to prescription refill requests. Now, e-prescribing authorizes and transmits around 30 authorizations in a few seconds.
Furthermore, it has also become easier to execute an emergency refill for a patient who runs out of medication.

In e-prescribing, different elements of the paper can be accessed into a digital format. The elements include the dosage, identity of the sender, and the patient’s identification.
Pharmacists and healthcare providers are working to utilize e-prescribing formats to authorize medications by patients. It also involves short message systems that pharmacies can use to notify patients about prescription fills.

Benefits & Significance of Clinical Informatics in Healthcare IT Industry