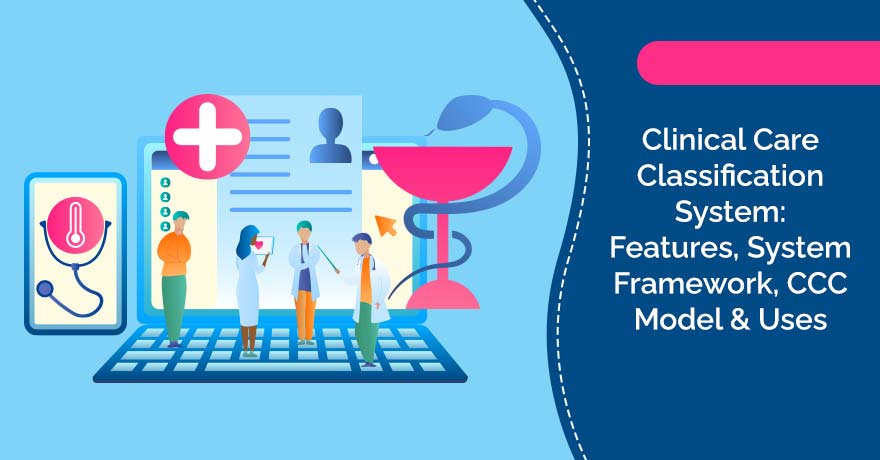 Clinical Care Classification (CCC), or previously known as the Home Health Care Classification (HHCC), was created to document nursing care in-home health and ambulatory care settings. The CCC framework makes it possible to code the data in four levels. It allows the coded data to be aggregated upward for data and dissect the data downward to obtain level data elements.
The major feature of CCC consists of atomic-level concepts using qualifiers to expand the concepts. It is specifically designed for EHRs and healthcare information technology & other electronic information processing systems. Furthermore, its codes are based on the ICD-10 structure for information exchange to promote interoperability.
It uses a coding structure of alphanumeric digits to link the two CCC systems terminologies. It also facilitates the electronic documentation of patient care at the point of care. CCC also consists of adaptable and expandable data elements.

In 1988, the American nurse Harriet Werley established the Nursing Minimum Data Set, which comprises 12 variables. The eight variables were focused on patient demographics, and four were focused on nursing practice. The Nursing Minimum Data Set became the basis for the classification standards recognized by the ANA.
In 1991, the Database Steering Committee submitted to the Congress on Practice a resolution that NI adopted as a nursing specialty. In 1992, the committee developed the criteria, determining the first 4 of 12 nursing terminologies.
The ANA submitted 4 out of 6 terminologies to the National Library of Medicine for input. In 2006, President George W Bush issued an order that every person in the country should have an EHR by 2014.
In 2008, the Healthcare Information technology Standards Panel recommended the Clinical Care Classification as the nursing terminology for the exchange of information. In 2020, healthcare became the custodian of Dr. Virginia Saba’s Clinical Care Classification System.

Clinical Care Classification System (CCC) consists of atomic-level concepts using qualifiers to expand the concepts. It is designed for determining productivity, outcomes, and care costs.
It uses a framework of components to classify the CCC system definitions and represent four patterns focusing on the holistic approach to patient care. Furthermore, it consists of adaptable and expandable data elements. CCC is specifically designed for EHRs and HIT & other electronic information processing systems.

It depicts the documentation of patient care and health providers in the healthcare settings. Also, it shares the relationship between CCC of nursing diagnosis and Outcomes and CCC of Nursing interventions and actions. The CCCC model has three major concepts including, Nursing Diagnoses, Interventions, and Outcomes.

The components of nursing care can be defined as elements that show a unique pattern of clinical care nursing practice. Nursing diagnosis shows the clinical judgment about the consumer’s response to potential health conditions. The CCC system consists of atomic-level elements that encompass interventions and outcomes. The CCC system describes the steps of the nursing process as Assessment, Diagnosis, Outcome Identification, Planning, Implementation, and Evaluation.
The process is the standard of nursing practice recognized by the ANA for decision-making in a standardized framework. The system supports the exchange of information and makes it available for retrieval and analysis in the EHR. It is designed for a computer-based system and is applicable in multiple health settings. The CCC was developed from a study conducted by Dr. Saba and the research team through a contract with the Health Care Financing Agency. The aim was to develop a method for assessing patients for the prediction of nursing resource needs.
The system is a framework consisting of four major levels. At the highest level, the CCC framework consists of four healthcare patterns. The third level in the system consists of over 180 nursing diagnosis concepts sharing patient problems. The fourth level is represented by the outcomes and resolving the patient’s condition. It also stabilizes and maintains patient condition.
The system uses a five-character structure to code the different terminologies. The coding strategy for each terminology consists of the first to fifth positions. In the first position, you have an alphabetic character code (A to U) for the care component. In the second and third positions, a two-digit code is followed by a decimal point. In the next position, one code is for subcategory and sometimes followed by a decimal point. The fifth position is one code digit for one of the three actual outcomes.
The benefit of implementing CCC is the ability to represent nursing care in health information systems during patient care or any transition. It supports the organization to reconcile patient-centered information. It standardizes data on evidence-based practice and research. The computable structure of the CCC system promotes the system upgrade of EHR systems.

Nursing practice applications include code electronic clinical encounters. It provides standardized concepts for decision support and enables evidence-based practice protocols to analyze patient care.
In Nursing Education Applications, CCC teaches students how to code PCOs based on the nursing process. It evaluates online the documentation of student’s patient care. In this, it uses second life to enhance educational experiences. Furthermore, it is also used in nursing administration applications and nursing research applications.

The CCC was developed to support the education and knowledge of healthcare professionals with the system terminologies using smartphones. The CCC system tool is viewable with any device and is designed for documenting a nursing plan.
When it comes to healthcare technology, you can find several latest terms every day. We, at Covetus, have expertise in developing and transforming the information into standard formats like CCD, HL7, and more.
Our consultancy services allow you to make decisions related to the quality of healthcare programs. Furthermore, our healthcare applications serve as a platform to work for primary and secondary services like mobile apps and cloud services.