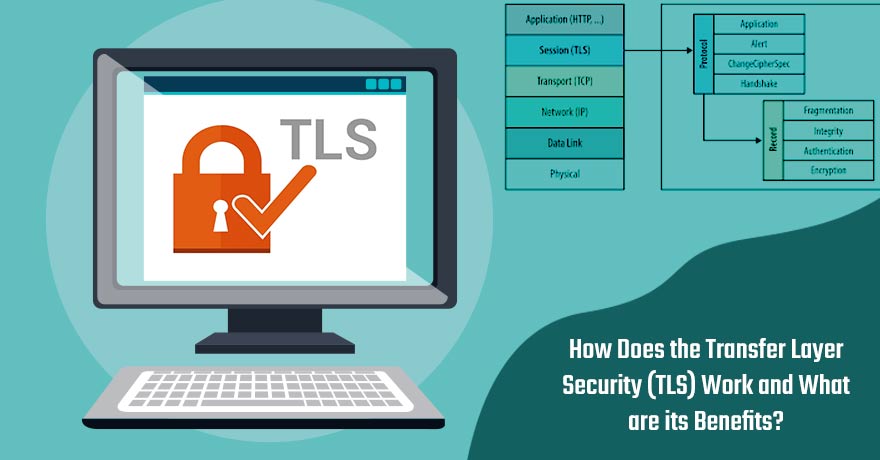 Transfer Layer Security is a secure socket layer and cryptographic protocols designed to provide security over a computer network. Different versions of this protocol are used in different applications such as instant messaging and voice over IP. It is designed to protect the information between client and server. The primary use of TLS is to encrypt the messages shared over mail and messages.
It was proposed by the Internet Engineering Task Force (IEFT). The first version of this protocol was published in 1999. The current and recent version of TLS, i.e.,1.3, was published in 2018. It is an IETF standard that prevents message forgery and tampering. Regardless of what information is transmitted, several businesses use TLS to secure communication.
When secured by TLS, the connections between the server and client should possess different properties. For instance, the connection should be private because symmetric cryptography is used to encrypt the data shared. Secondly, the connection shared should be reliable because messages shared include an integrated check using a message authentication code. Lastly, the identity of the parties can be authenticated using public-key cryptography. TLS supports different methods for encrypting data and message integrity.
Today, every industry, including healthcare, is using TLS for a better and secure connection. Several certificates are offered to protect medical information and devices. Healthcare services can combat phishing; therefore, it becomes essential to use SSL certificates to prevent data from attackers. The certificate protects healthcare services against potential data breaches and compliance gaps. Here are a few key points regarding data security that you should note if you are into healthcare services.

People have a misconception that TLS is similar to SSL. But TLS is secure than SSL and has a stronger message authentication.  Both are not interoperable. It is an improved version of SSL and removes an alert message by replacing it with other messages.
1. SSL protocol support for the Fortezza cipher suite. TLS follows a standardization process that defines new cipher suites easier like AES and Idea.
2. SSL messages adjoin the application data in an ad-hoc way; the TLS version depends on HMAC, i.e., Hash-based Message Authentication Code.
3. To provide more consistency, the Transfer Layer Security specifies the certificate that is exchanged between nodes. Because of history, TLS and SSL are used interchangeably.

What is an SSL Certificate?

SSL refers to Secure Socket Layer. It is an excellent technology that keeps internet connection secure and safeguards the data that is sent between the systems. The systems can be server to server or client to server.
Furthermore, it uses encryption algorithms and prevents hacking of data. The data sent could be anything from credit card information to names and addresses. TLS and SSL do the same job of encrypting the messages. They both offer websites the same HTTPS address bar and recognized as the sign of online security.

The client gets connected using TCP and sends several specifications. A connection is initiated using a TLS handshake.
The handshake establishes a cipher suite for the communication sessions. It is a multi-step process and involves the cipher message, exchange of keys, and a finish message.
The server checks what is the highest version of TLS and picks a cipher suite from one of the client’s options. After the setup is done, the server gives a certificate. The certificate is trusted by the client or the party that client trusts. The server and client compute the key for symmetric encryption. The connection is set up now, and the client and server or the parties communicate smoothly.
TLS is used on the top of the protocol like TCP. It has three major components, i.e., Encryption, Authentication, and Integrity. Authentication makes sure that the data is exchanged between the claimed parties. Integrity checks that the data is not forged. And, Encryption hides the data transferred between the different parties.
But before the messages are exchanged, the server and the client must agree on the TLS protocol version and verify certificates, if necessary. When the connection is placed, the client sends different specifications in plain text and other forms.

TLS 1.0 was defined in RFC 2246 and was an upgrade version of SSL 3.0. As per the RFC, "the differences between this protocol and SSL 3.0 are not dramatic, but they are significant enough to preclude interoperability between TLS 1.0 and SSL 3.0."

It was defined in RFC 2246 in 2006. It was an updated version of TLS 1.0 and included protection against cipher blocking chain attacks. Change in handling of paddling errors and support for IANA registration of parameters.

TLS 1.2 was defined in RFC 2246 in 2008. The differences in the above versions include the enhancements in the server and the client’s ability. TLS extensions and AES cipher suites were added.
The MD5-SHA-1 combination in the message hash was replaced with SHA-256. The MD5-SHA-1 combination was also replaced with a hash negotiated during the handshake.

TLS 1.3 was defined in RFC 8846 in 2018. Major differences from TLS1.2 include the digital signature when the previous configuration is used. It integrates the session hash. It adds the ChaCha20 stream cipher with the Poly1305 message authentication code. It depreciates the use of a record layer version and freezes the number for backward compatibility.

Both TLS and SSL manage connections similarly. However, TLS shares a secure method for exchanging messages through different features. TLS ensures that no third application gets connected with any message.
Here are a few benefits of using Transfer Layer Security.

It uses an encryption and hashing algorithm during the whole session. Furthermore, it provides operation for the authentication mechanism.

2. Ease of Use and Deployment

TLS is used beneath the application layer; therefore, the majority of its operations are invisible to the client. Many applications of TLS and SSL run on windows server 2003 operating systems.
SSL certificates are purchased from an authority for a certain period. The certificate is uploaded to the server and then shares a secure connection for visitors.

It prevents malicious attacks between the client and the server. Plus, it ensures that the data is transmitted over a secure medium and reaches the destination without any loss.
This becomes important when the organization is dealing with secure information like credit cards and bank account information.

4. Increases Trust in the Customers

The websites that are secured by TLS increase the trust in the end-users. Also, the customers would like to browse over the website that has a secure connection.

It has higher latency compared to different encryption protocols. A study revealed that connections shared by TLS have nearly 5ms latency in comparison to those that have not been encrypted.
Also, the older version of TLS still might get attacked. Only a few platforms support TLS 1.3. Other platforms support the latest TLS version.

For Healthcare organizations, using TLS/SSL is an important requirement. The healthcare services that transmit billing information and or medicare is covered by the HIPAA and include security standards. Security protocols such as TLS helps healthcare services become HIPAA compliant and do not provide compliance on their own.
TLS and SSL are majorly used to secure connections to servers and save patient’s data from hackers. Patient Health Information can be shared between physicians, imaging centers, surgeons, and health insurance companies.

Overall, TLS is one of the best and most secure encryption methods. The TLS connection settings take a load time. It is also assumed that client and server must communicate several times before exchanging messages. However, several implements have been made to make the TLS protocol faster.

What is PHI & How it is Making an Impact on the Healthcare IT Industry?