7 Meteor.js Benefits That Make it an Excellent Framework to Build Web & Mobile Apps 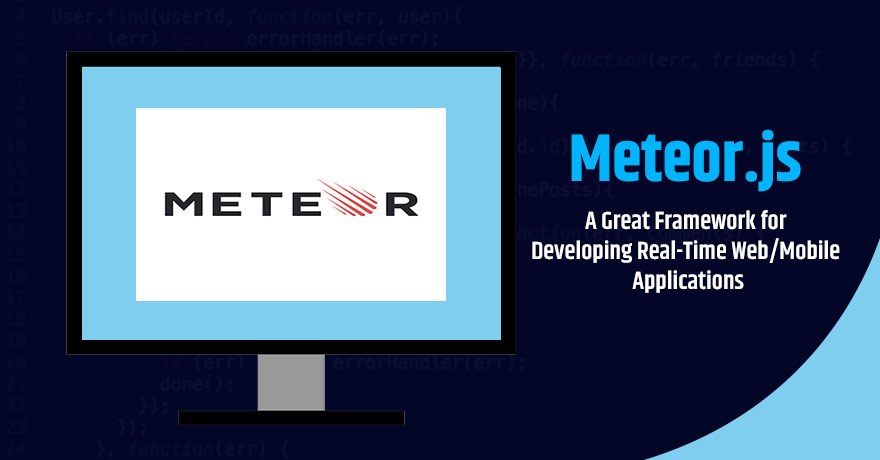 Be it a beginner or an experienced web developer: everyone looks for a framework that could be used for mobile and web. Also, it could save everyone’s time and effort. Meteor.js is an open-source Javascript web framework that is written using Node.js.
It is a popular framework that solves this problem of the developer community and also speeds up the development process. Furthermore, Meteor.js allows the usage of a single language and offers the facility of real-time applications.
Let us delve deeper and know how Metor.js could help the developers and about its future in the industry.

What Do You Understand by Meteor.js?

Meteor.js is one of the best and hottest frameworks for development in today’s scenario. It produces cross-platform code and allows rapid prototyping. Furthermore, it could integrate with MongoDB and uses a publish-subscribe pattern to automatically update data changes without requiring the developer to add any synchronization code. Meteor js could also be used with ReactJS and AngularJS frameworks.
It was first released in 2011 under the name Skybreak. In 2012, it was renamed as Meteor and was officially launched. For the next months, Meteor with large investments increased its user base and became a popular framework. From 2016, this development group started working on a backend layer based on GraphQL and replaced the subsystem.

Benefits of Using Meteor.js in Development

Out of the countless frameworks existing, Meteor should be considered for upcoming projects. Here are some major benefits of using Meteor.js for mobile and web development.

1. With Meteor.js, Your Applications are Real-Time By Default

Popular companies like Twitter and Facebook have been using a real-time web. Today, users expect web applications to work instantly. But creating real-time web applications is difficult. When anything is added to the database, the data in templates is also updated. Next, when a user submits a form, the action occurs immediately.

2. Saves Lot of Time With Packages

You could save a lot of time by creating a user account system with a Meteor project. Several commands could be run by the users so that they could choose how they have to sign up. Furthermore, it also provides different packages that create the front-end of the system. With smart packages, you could include the writing of applications, automatically compilation, and integrating Bootstrap.
For instance, if you have to build a user account system, you have to follow a long process. But with Meteor.js, you could create a system through code. When you would add the code, it would add this smart package to your project. Additionally, when the system is set up, it allows you to undertake any task such as signing up users using different templates.

3. It Has a Supportive Community

Meteor’s community is an excellent asset. It has several resources that help developers in developing a powerful website. Moreover, proper documentation of the framework offers a simple way of coding. It includes Crater, a Reddit-like site to keep a check on what's going on in the world of Meteor.
Meteor.js community offers detailed documentation and resources that could be a helpful tool for the developers. Next, it has Kadira, a tracking application that is easy to use and offers several benefits.

4. Developed With a Single Language

Even if you are new in the field or an experienced person, the developers could use Meteor.js easily. The development process of Meteor.js is simplified and has the frontend, backend, and database merged into one language - Javascript.
The development process with Meteor.js becomes simple. Previously, the developers had to undertake front-end and back-end along with the database. But with Meteor js, they have to use only one language.

5. A Tailor-Made Framework for Web Developers

Meteors.js is the preferred choice for web developers. The developers do not have to include Javascript and CSS files and HTML tags. It also uses Handlebars and Spacebars syntax for the template work.
The developers are free to create structures of the projects according to the client requirements. Also, it allows the developers to match and mix components due to its modularity.

Today, when new technologies are launching every day, the developers look for a product that could offer the maximum output in minimal time. With Meteor.js, you could create an effective web app within a week.
The availability of these packages also improves the app's development. If you are a fresher, then you don’t have to be familiar with Javascript conditions. You could start a project with Meteor.js as soon as you install it.

Meteor.js works when you have to convert web apps into smart apps. It converts apps through the Cordova platform. Furthermore, you could create native mobile apps with HTML, Javascript, and CSS. Cordova has a set of APIs that allows the use of native functions such as GPS, camera, and more.

Reasons for Using Meteor.js for Applications

It has a collection of libraries and packages that are bound together. It is flexible, and most importantly, requires lesser code, which means it has fewer bugs and offers higher quality results. With the growth of online applications and multiplayer web games, the need for real-time applications is also increasing.
Furthermore, it could build apps for any platform, including iOs, Android, and desktop. Meteor.js has the advantage of scaling because of its dependency on DDP.

While there are several benefits Meteor.js offers, it has certain limitations too. For instance, it has NO SQL for databases. Know more limitations here.

1. It Lacks the Server-Side Support

Server-side rendering is important for search engine optimization tasks. Meteor.js lacks SSR support. SSR often helps with performance when a fully-loaded app is sent from the server on a request. Surprisingly, this problem could be solved through a third-party package. The meteor developers claimed that this problem would be fixed in the future.

The absence of the native library is recompensed by different client libraries that would be useful for different projects. For instance, Bootstrap is good for web design applications and user experience. User interface components could build ERP and admin apps.

Another limitation of using Meteor.js is it could synchronize only with MongoDB Database. Also, when you have to build a large app, then you have to switch to a more scalable stack.

4. It Lacks Inbuilt Support for PWA

PWA refers to Progressive Web Applications. It lacks inbuilt support for creating any product.
The structure of any app combines web and device applications. Sadly, technologies such as HTTP/2, Service Worker, and others are not supported.

Both Meteor.js and React JS are free to use. While Meteor is an open-source platform for building mobile and web apps in pure Javascript, React is a Javascript library for building user interfaces. It offers a simple programming model and better performance.
ReactJS has a better usage coverage area, including Arts & Entertainment, Science, Games, and Electronics. Meteor.js has not led over React in any category.

What is the Future of Meteor.js?

With Meteor.js, the developers have to choose from an array of Javascript web frameworks and mobile app development tools. Meteor is a full-stack framework and supports the MVC design principle. Furthermore, it complements the MEAN stack. A rapid increase is noted in the developers who switched from LUMP and MEAN Stack.
The members of the community update new libraries and packages to overcome the limitations of other frameworks. Hence, it keeps on evolving to meet the latest trends in web and mobile development.

Meteor.js different versions are coming quickly. Several attractive Meteor.js are live and are being used on the web. If you want to use a Javascript framework that works easily on mobile and web interfaces with higher scalability, the Meteor.js is a great option. It is gaining a response from worldwide and is steadily getting popular around the world. Meteor is planning several changes for the framework, and this has the potential to open up to the larger JS community.
When it comes to web development, we offer result-driven solutions using several technologies and tools. With engaging visual strategies, our web designers would develop an engaging product to attract your customers. Development plays a crucial role in the creation and maintenance of websites. With Covetus, you could be sure to get the best from the pool.